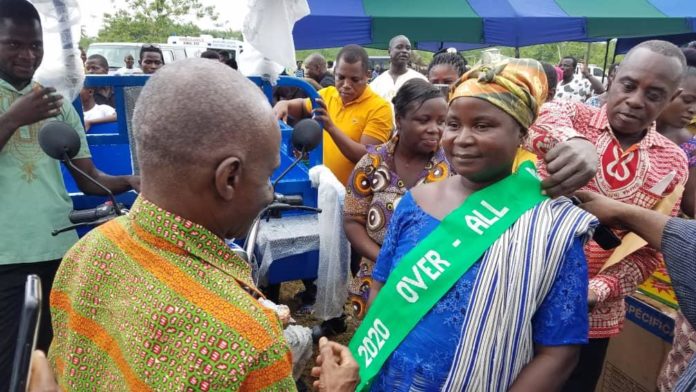 Madam Bertha Tsavanye, a 36-year-old woman has been crowned the overall best farmer in the Agortime-Ziope District of the Volta Region.

She cultivated a total of 17 acres of cereals, root tubers, and vegetables, including maize, cassava, tomatoes, okra, and pepper.

Bertha also has over 130 sheep and goats, and some 120 guinea fowls, and dozens of local chickens.

She was awarded a motorized tricycle, other farm tools, and inputs, in addition to a certificate of recognition.

She thanked the government for the flagship programmes in agriculture, and also the district Agric Extension Officers for their support.

Bertha has been farming for the past 10 years, and lamented to the Ghana News Agency (GNA), that access to capital remained a challenge for farmers in the area.

Certificates and prizes including chest freezers, motorbikes, and basic farm inputs were awarded to 18 other farmers who excelled in the production of various crops and animals.

An Agric Extension Officer, a disabled farmer, and a women farmer group were among those awarded.

The celebration was on the theme “Ensuring Agriculture Development Under-COVID-19: Opportunities and Challenges”.

It was held in the remote farming community of Kporta, and brought together, farmers, and other stakeholders in the agric sector.

An exhibition was mounted, showcasing the rich agricultural produce of the area.

He advised farmers to monitor the weather patterns, and consider the conversion of the many dugouts in the district into irrigation outlets.

Mr John Amenyah, the District Chief Executive (DCE), said bushfires and illegal logging continued to challenge the progress of agriculture in the district.

He, therefore, called on the Forestry Commission to enforce laws against the practices, and pursue perpetrators without fear.

The DCE raised concerns over the one percent HIV rate in the district and advised on safe sexual practices.

He said some farmers had started producing cocoa, and appealed to the government to construct a road from the community to the mainland.

Togbui Akoshiehu also pleaded for a health center for the community.