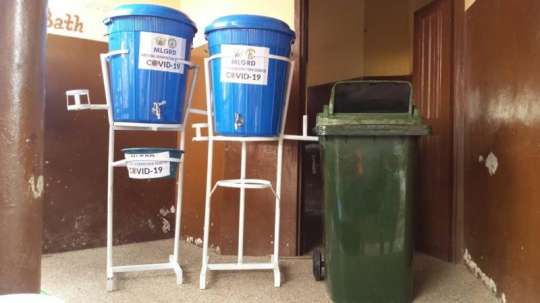 Access to handwashing facilities at basic schools have improved in the Tamale Metropolis as most of such schools display veronica buckets with soap on their compounds for pupils to wash their hands.

The veronica buckets have been provided to the schools by the government as part of the COVID-19 safety protocols to enable pupils and teachers to wash their hands regularly to prevent the spread of the disease.

The GNA visited some of the schools to ascertain their sanitation situation ahead of the onset of the rainy season by the end of May and how poor sanitation at the schools could result in the emergence of faeco-oral diseases such as typhoid, cholera, and dysentery.

It was observed that while all the schools visited had veronica buckets, most of the buckets usually ran out of water before the schools closed for the day.

It was also observed that whilst it was appropriate to place handwashing facilities (veronica buckets) near toilet facilities, some schools rather placed the buckets at the entrance of classrooms forcing pupils to cover a distance before washing their hands after defecating.

It was further observed that the toilets of some of the schools especially Zogbeli JHS and Primary were full with sparked uncomfortable stench making it unbearable for pupils to use.

Ms Nuriya Alhassan, a JHS two (2) girl at Zogbeli JHS, shared her experiences using the toilet and said “When you enter and come out, everybody will know that you have been there. Your uniforms will be smelling. Sometimes, we just try to skip going to the toilet whilst in school because sometimes, you will not even get water to wash your hands.”

Master Mohammed Fuseini, JHS one (1) boy at Zogbeli JHS said “The smell from the toilet is unbearable. We can’t withstand it. That’s why we find some space around to defecate when the need arises and those, whose houses are near, go home to defecate and sometimes, do not return to school.”

Lack of access to proper toilets, and handwashing facilities with water and soap, results in the spread of feaco-oral diseases such as typhoid, cholera, and dysentery, which kill some school children every year.

The lack of such sanitation facilities also impacts negatively on the country’s quest to achieve the Sustainable Development Goals on water, sanitation, and hygiene.

Madam Sumayatu Alhassan, Environmental Health Officer at Tamale Metropolitan Assembly (TaMA) said the Environmental Health and Sanitation Unit of TaMA with support from some development partners would, this year, construct 10 sanitary facilities for basic schools in the area to ensure safe and improved sanitation practices.

Madam Alhassan, therefore, called on basic schools in the metropolis to make good use of the handwashing facilities provided by the government to prevent the emergence of water-borne diseases during the rainy season.

NHFB to embark on eye screening exercise among basic schools