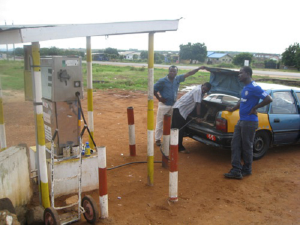 file image of a gas station

Two gas filling stations at Amasaman in the Ga West municipality in the Greater Accra Region which are operating under conditions considered to be a threat to human security have been closed down.

While one of the facilities, which was recently constructed, had liquefied petroleum gas (LPG) leaking from one of its cylinders, the operator of the second facility could not produce its operational licence.Also, the floor of the second facility did not meet safety requirements, aside from the non-availability of good fire-fighting equipment.Closure

DCFO Simpson explained that the move followed a report the Greater Accra Regional Fire Station received from the Amasaman Municipal Fire Station last Wednesday to the effect that a gas filling station had developed a leakage.

“When I got the call last Wednesday, I asked the Amasaman Municipal Fire Station to respond swiftly to put the situation under control. The officers there were able to prevent the gas leakage from degenerating into any fire outbreak. Steps were taken to cool down the cylinder, while arrangements were made for a gas truck to discharge its content,” he added.

It was observed that there were cracks in the vertical pipes below the gas cylinder in question, a sign that something might have hit those parts of the pipes, resulting in the cracks.

As of the time of the visit to that gas station around 2 p.m. yesterday, there was no activity going on there but the caretaker was at post.

DCFO Simpson explained that even though more investigations were being conducted to ascertain the exact cause of the near disaster, it was evident that the operators of the gas filling station did not do a test run before taking delivery of the first consignment.

“The normal practice is that before a new gas filling station begins operation, there must be a test run using water. But in the case of this particular gas station, there was no test run before it took delivery of gas. This is what nearly caused disaster,” he said.

At the second filling station, the operational licence was not displayed, as required by law.

Also, the delivery tubes for the gas were worn out and showed signs of leakage, with the platform on which the gas cylinder was mounted said to be substandard.

“The floor is supposed to be a wooden platform to prevent friction between the gas cylinder and the ground. But, as you can all see, there is no such platform. The operators are doing their own thing and that is unacceptable,” DCFO Simpson said.

Sharing the same premises with the gas filling station are a chapel and a shop, a situation that is frowned on by the law.

Even though there was a hand-dug well to serve as a source of water to fight any fire outbreak at the gas station, it was observed that the polytank mounted to supply water had traces of a leakage.

The Fire Service team posted a notice on the gas station, ordering the operator to stop work with immediate effect.

The disaster has made the public raise concerns over the siting of gas filling stations close to residential areas and the lack of a robust monitoring mechanism.

Taking a cue from that unfortunate incident, the GNFS resolved to embark on an operation to get rid of all illegally sited gas filling stations.

Boundary road from Tetteh Quarshie interchange to be closed for repairs

Environmentalist threatens to sue own church for noise