Arsene Wenger’s decision to start 21-year-old striker Yaya Sanogo ahead of Lukas Podolski and Joel Campbell in Arsenal’s Group D penultimate match with Borussia Dortmund on Wednesday got a lot of asking for the manager’s competence, but the answer came in just 72 seconds into play when the young striker sneaked in from a seemingly offside position to put the ball in the net. 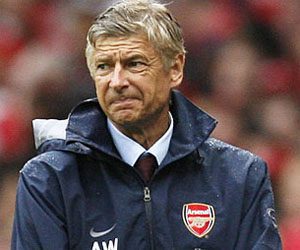 Arsenal lost 1-2 on Saturday at the Emirate to Manchester United and the Frenchman’s decision could have left him suffocated if the results on Wednesday evening hadn’t come his way, but Wenger knows how to dig deep into his magic suck anytime his back is on the wall.

The gunners went a full gear right from the blast of the whistle and got their first goal in the second minute. Yaya Sanogo started the move and expertly finished it off as he slotted the ball through the legs of Roman Weidenfeller to register his first goal for Arsenal.

Sanogo received a throw in a pass from Calum Chambers on the right, controlled it beautifully and gave it to Santi Cazorla, who placed the ball behind the Dortmund defense line for the French striker to do the damage.
The 21-year-old who got the nod due to an injury to Danny Welbeck nearly scored his second on the night, but the striker decided to cut back instead of going straight and allowed the German side to recover.
The visitors came close in the 38th minute when Ikay Gundogan’s diamond ball found an unmarked Henrikh Mkhitaryan but Arsenal’s stand-in goalie Emiliano Martinez blocked the ball with his legs.

Back from the break the visitors took the game to Arsenal in their quest to restore parity, but it was English winger Oxlade-Chamberlain, who managed to sink in a shot from a distance hitting the post in the process as the German number two goalkeeper was kept ball watching.

The match sealed goal for Arsenal came in the 56th minute when Chilean forward, Alexis Sanchez beautifully curled one past Roman Weidenfeller from 20-yards out after taking on his marker.
The result means that both Borussia Dortmund and Arsenal have qualified from Group D.