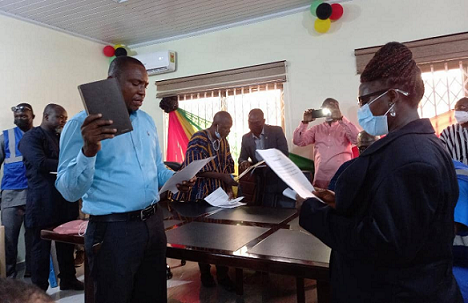 A 19-member Assembly of the newly- inaugurated Guan District has been sworn into office.

The swearing-in took place on the sidelines of the inauguration of the District.
Standing Orders of the Assembly were adopted.

Madam Edith Lucy Dzormeku, Hohoe Magistrate, swore the members into office with the Oaths of Office, Allegiance and Secrecy.

Mr Kenneth Bright Norviewu, Assemblyman for Lolobi Kumasi Electoral Area, polled all 19 votes to be elected as the Presiding Member of the District.

The District is yet to get a Chief Executive to be nominated and approved.
Mr Norviewu pledged to work hand in hand with the Assembly members.

Mr Philip Kweku Adom, Assemblyman for Santrokofi Gbodome, told the Ghana News Agency (GNA) that he expected that the inauguration would be a better beginning for the District.

He also expected great developments in the health and education sectors and improved living conditions.