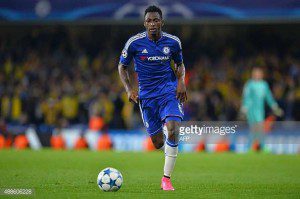 Chelsea defender Baba Rahman has admitted that he must improve his defensive capabilities to cement a position in Mourinho’s side.

The Black Stars left back has struggled for regular role in the Chelsea set up since joining the English champions in August.

The former Augsburg left back insists he will cement his role in the Chelsea set up but needs to improve his game to achieve that feet.

“I know I have to work extra hard to ensure I have enough playing time with the team. I need to improve my defensive play,” the 21-year old Baba Rahman said.

Chelsea have been struggling the the league with just three wins from twelve matches, losing seven and drawing two but the Ghanaian believes that he will fine tune his form to help the London club.

Baba Rahman played full throttle in the two-legged tie between Ghana and Comoros in the 2018 World Cup which the Black Stars won 2-0 on aggregate.