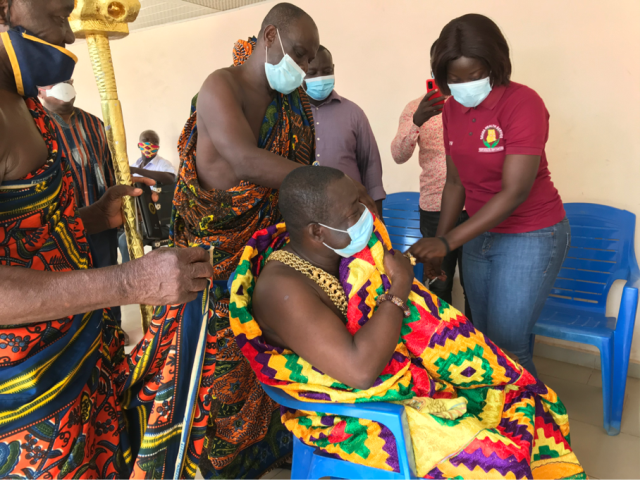 The Birim North Association of Chiefs headed by Obrempong Kwesi Amoh Kyeretwie, the Chief of Abirem and acting Gyaasehene for the Kotoko Traditional Area has received the first dose of AstraZeneca Vaccine.

The move by the traditional rulers to take the COVID-19 vaccine jab is expected to encourage their subjects that the vaccine is safe.

The vaccination, which was carried out by health workers from the Abirem Government Hospital covered about 24 members of the association whose actions were seen as an encouragement for others to participate in the national immunization exercise.

Speaking in an interview with the Ghana News Agency at Abirem, Obrempong Kyeretwie, said the group was the first to have taken the vaccine since it was extended to the Birim North District of the Eastern Region.

He said he would continue to educate the public on the need to take the vaccine to ensure that a large number of inhabitants had access to it.

Despite the vaccine, he said members should still adhere to the COVID-19 protocols such as frequent washing of hands, social distancing, and wearing nose and face masks.

Meanwhile, Mr. John Osei Frimpong, Member of Parliament for Abirem Constituency, who was on a “Thank You Tour” visited the association to express his appreciation for voting him for the second time.

He promised to support the development of the Birim North District by helping to promote agriculture in the area.

He vowed to ensure speedy work done on the Nkawkaw- Abirem road to promote effective movement of goods and services.

No significant side effects of Covid-19 vaccines in Volta – GHS