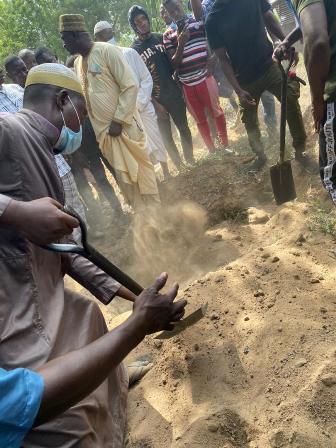 Ishmael Abdallah, the 10-year-old boy, who was allegedly murdered at Kasoa for ritual purposes, was on Thursday buried at the Amanfrom Muslim Cemetery after Islamic rituals.

Sheikh Yousiph Saeed Ankomah, Imam for Taifa, who conducted the burial service, prayed for the soul of the deceased and asked the bereaved family to take heart and trust God for better times ahead.

He asked parents to develop interest in what their children did outside home, in their friends and what they used mobile phones for, to avert such calamities.

Sheikh Ankomah said the incident should be a lesson to all parents and emphasised the need to bring up children in the fear of God so they could become responsible citizens.

He said what was needed now was forgiveness and appealed to the bereaved family and residents of the community to be tolerant.

Two teenagers have appeared before the Ofaakor District Court for allegedly murdering Abdallah at Coca-Cola, near Lamptey Mills, at Kasoa in the Central Region.

Felix Nyarko, aka Yaw Anane, a 16-year-old labourer, and Nicholas Kini Kwame, an 18-year-old student, have been charged with conspiracy to murder and murder of Ishmael Mensah Abdallah.

The court, presided over by Mrs Rosemond Vera Ocloo, preserved their pleas.
The accused persons are to reappear on April 20 as investigations into the matter is ongoing.

The alleged murder shocked and saddened the nation, with many calling for restrictions on the activities of spiritualists on television.

It also attracted statements from the Gender Ministry and civil society organisations.

On Wednesday, April 7, a government delegation and personnel from the Counselling Unit of the Ghana Police Service visited the bereaved family to commiserate with them.

The burial was mainly attended by males and attracted relations and sympathisers across the country, especially from the Oti Region, where the deceased hailed from.