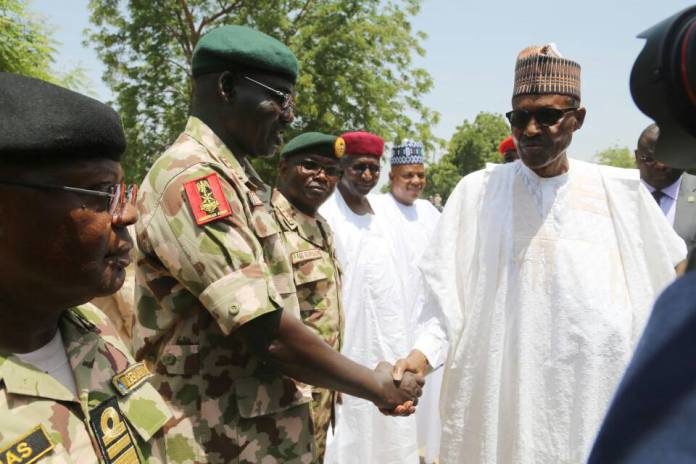 “All problems, personal, national, or combat, become smaller if you don’t dodge them, but confront them. Touch a thistle timidly, and it pricks you; grasp it boldly, and its spines crumble. Carry the battle to the enemy! Lay your ship alongside his!”

Genuine leadership inspires confidence, trust and innate followership. It provides direction and sets the agenda, as well as define time frames of accomplishing identified targets. Nigerians often say, an ideal leader is one who markets himself as servant-leader to the people. But it takes courage to resist the temptation of bossiness to condescend to such levels.

So, a leader without courage is like a bird stripped of its wings. Courage gives a leader the savvy to fearlessly confront and solve both physical and intellectual problems affecting the people or organization he superintends. Courage stands out as the most potent virtue of a leader, as echoes American author, politician, and diplomat, Clare Boothe Luce, who asserted that “Courage is the ladder on which all the other virtues mount.”

Therefore, leadership goes beyond the theorized external prescriptions of conventions. The man on whose head the cap of leadership descends relies more on his invisible attributes to deliver or epitomize venerated leadership.

Nigeria’s Chief of Army Staff (COAS) and leader of the Counter-terrorism operations, Lt. Gen. Tukur Yusufu Buratai in all gradations, embodies the strength of leadership courage. Leading an Army to victories against terrorism and insurgencies in Nigeria is a grueling task.

It demands much more than kitting troops; restocking armouries and ferrying soldiers to the frontline for battles. The leader of the counter-insurgency requires courage to enforce Rules of Engagement (ROE), discipline, enforce indiscriminate redeployment of troops and even the courage to take the war to the doorsteps of the enemies. Nigerians have seen it manifest in Gen. Buratai’s leadership of the Army.

It is the push of courage that fearlessly propelled Gen. Buratai to lead his troops to Sambisa forest and conquer it after a fierce battle with resistant insurgents. Before this hour, Sambisa forest was famed as the deadliest haven of the terrorists with an impenetrable fortress, which housed Boko Haram leader Abubakar Shekau, other top commanders, a pantheon of foot soldiers and a dozen hostages. But the courage of Gen. Buratai demystified it. Others before him dreaded Sambisa until the expiration of their time in office.

Some people think leadership is a tea party. That’s a huge joke! It’s in reality a burden for those truly out for service to humanity. Its complexities sometimes disarm, when certain problems sprout up. It shudders the heart and soul constantly, much as it drains energy. Its not a bed of roses or as easy buying candy at a roadside shop. Therefore, like the old adage goes, uneasy lies the head that wears the crown.

President Buhari knows deeply the inclination of his country men and women. And a phrase in his speech when he interacted with the Nigerian Community, in Dubai, last April keeps resonating all the times.

Buhari said; “You can’t take Nigerians on paper, it’s when it comes to practical application of what is on paper, this is where you have problems with Nigerians.”

But Gen. Buratai has proven that he is a leader who can translate his ideas from paper into reality; who has the nerve and courage to explore new frontiers or break new grounds in leadership. He exudes courage; he stooped and conquered the enemy several times. So, even those gifted with all other leadership qualities, but devoid of courage, pales into insignificance.

Dorothy Thompson explains that “Courage, it would seem, is nothing less than the power to overcome danger, misfortune, fear, injustice, while continuing to affirm inwardly that life with all its sorrows is good; that everything is meaningful even if in a sense beyond our understanding; and that there is always tomorrow.”

Therefore, the many times insurgents attempted to demoralize and frustrate Gen. Buratai and his troops in Northeast, by unleashing attacks on military bases, he has never flinched or dread confronting them again and again. Rather, he is emboldened by such incidents to strike more ferociously. It is the unyielding spirit of courage in a soldier and leader.

The several times terrorists attacked his convoy in the Northeast, it was courage that gave him the impetus to fight back. And terrorists mournfully counted their casualties after such encounters.

But sometimes, if you are not strong-willed, distractive cacophonies alone can throw you overboard. Nigerians can make your competent self, feel an empty void within, which undermines or blurs your training and experiences. But it is the influence of courage that compels you to see beyond the machinations of detractors. Buratai has passed through such hellish experiences; remained stronger and more focused.

And it only takes courage for a leader to successfully fight several battles simultaneously. Gen. Buratai is fighting on many fronts, but has remained undaunted by the enormous challenges and confrontations. The Army Chief battles terrorists in the Northeast, their masked agents, armed bandits /cattle rustlers, and armed local militias among others.

Thereafter, he devotes time to battle civilian adversaries, detractors, hirelings against the Nigerian Army as well as spies within the system. But courageously, he dares them; emerges victorious and unhurt.

What drives his spirit and keeps him strong to remain afloat atop the leadership sea in Nigeria is what former British Prime Minister, Winston Churchill encapsulates in the wit that “Success is not final, failure is not fatal: it is the courage to continue that counts.” Gen. Buratai knows the courage to persist is more rewarding than shirking in the face of challenges.

And bolstered by such wisdom, Gen. Buratai’s focus has always been on his job and how to grab success. He is an extremely organized soldier and leader who takes his job damn serious at all times. He sleeps less; thinks more and dispenses himself as a leader who holds tenaciously more to transformational dictates than rhetorics.

His foot soldiers can vouch for him on this score any day. The Army General believes every step he takes is carefully thought-out and secured against lapses. His troops savor his amiability and relishes his gentle mien.

Nigerian troops are familiar with him the way a dog is to its owner. He knows what his troops require at any given time and works towards it. The comfort of troops is his number one priority and no obstacle hinders him from inspiring them into action and greater performance both in the trenches and the offices.

It explains why he has made it a conscious policy to persistently visit troops at the frontline, spend nights and devote a good time with them in the open fields; hook them unto interpersonal interactions to understand their feelings and insight into their peculiar problems.

And he spares no opportunity of enlightening his troops. He has taught soldiers loyalty and patriotism to Nigeria as sacrosanct creeds. Thus, the Army Chief again finds very useful the philosophy of the Chinese military strategist and war veteran, General Sun Tzu about the five essentials of victory.

Therefore, he knows that on these counter-insurgency operations; “He will win, who knows when to fight and when not to fight…He will win whose army is animated by the same spirit throughout all its ranks… He will win who, prepared himself, waits to take the enemy unprepared.”

And for years, Gen. Buratai has imbibed the culture of writing to his troops endearing epistles, commending and encouraging them on the battlefront at festive seasons. He visits them in the trenches at such occasions and celebrates with them. They converse freely and at such times, he does not hesitate to remind them of Tzu’s memorable caution that “There is no instance of a country having benefited from prolonged warfare.” Thus, Nigerian troops are in a hurry to end the war by whatever means possible.

Indeed, Gen. Buratai is honed for the job and knows its intricacies. He follows the turbulent tide and ensures his troops conquers it. Certainly, President Buhari must be an excited leader that his search for a competent and trustworthy COAS delivered to him a soldier like Gen. Buratai who is moulded after his (Buhari’ military persona and has kept the promise on combating Boko Haram terrorism.

So, President Buhari’s wish that he had remained a younger person to again lace his boots to hop into the trenches to battle terrorists has been replicated in a relieving fashion through the posturing and actions of Buratai as his Army Chief and the nemesis of Boko Haram. Gen. Buratai has the nerve and exhibits the courage to conquer his world no matter the odds staked against him.

Therefore, when some Nigerians mouth baseless criticisms of leaders, it amuses because they are far from the furnace and might not know the degree of the heat. No doubt, Gen. Buratai is experienced and knows perfectly how best to navigate the leadership path to safety, deliver positive results and successes on assigned assignments in Nigeria.