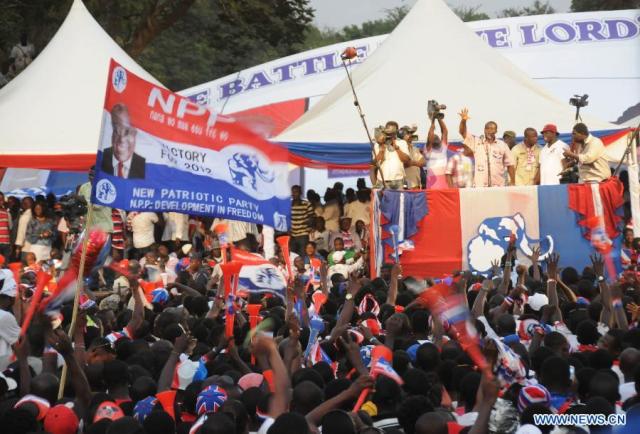 Two people are dead in the NPP and I don’t know how many are left to die before 2017. People attribute the problems in the NPP to Paul Afoko and Kwabena Agyepong but the real people responsible for all these problems are left alone.

They are chaired illegal meetings and making unnecessary speeches, and in the process, exposing their serious health conditions. People also assume the problems in the NPP started in 2015 and they falsely assure themselves that the problems would be fixed before the next month.

When the elections for the National Executive Committee came up in Tamale, Nana Akufo-Addo had his list of the people he could work with. Obviously, the names of Paul Afoko and Kwabena Agyepong were not on the list of favorites. What do you think will happen if Paul Afoko and Kwabena Agyepong win? Whatever your thoughts were, that is exactly what is happening in the NPP now. If Nana can’t work with you, even though you win election, you will be suspended for the CPP members to take over.

The early revelations why Afoko and Agyepong were going to have hard time running the party was when they attempted to change the guards at the party headquarters and when they held their first press statement at the party headquarters. This same ugly people attempted to disrupt both events. We are aware of how cutlasses, knifes, bottles etc were openly displayed at the headquarters, just to make sure that the elected Executives didn’t have peace to run the party. These went on whilst the leadership of the party led by Nana Akufo-Addo looked on.

When Nana Addo lost the elections in 2012, these same ugly guys occupied the “Obra Spot” and we all witnessed what happened. We are aware of what the Bolga Bulldogs and the Invisible Forces are doing and intimidating elected officials. These bad events led Nana Addo to go to the party headquarters to attempt to address the issue. As soon as Nana left the party office, a fake letter came out to say that the General Secretary of the party has resigned. As of today, we don’t know who wrote the letter and where the letter came from, Nana Addo has said nothing to that letter. Is this man qualified to be the President of Ghana? He is not capable of solving any problems in the NPP and yet claims he can solve all the problems in Ghana and make it a paradise.

Then in the course of the administration of Afoko and Agyepong, they received a letter from Prudential Bank stating that the NPP owed them GHC2.9m. This was a loan contracted by a cousin of Nana Akufo-Addo, Ken Ofori-Atta. Sir John, the then General Secretary of the NPP, explained that the loan was used for party business so the party should pay off the loan. Ken. Ofori Atta, one who signed for the loan, said the loan was his personal business and is responsible for the loan. The real owner and use of the loan is still not clear. What is clear is that, the loan has still not been paid. The NPP is waiting to come to power before they can steal money to pay off that loan.

Another letter came from Eco Bank also stating that a secret account has been opened and the signatories are Freddy Blay and Kwabena Abankwa-Yeboah, the First Vice Chairman and National Treasurer respectively. The danger is that the Chairman and the General Secretary of the party were not aware of this account but transactions have gone in and out of the account. Example some 100,000 pounds was given to Nana Akufo-Addo for his recent European tourand some GHC6.00m had been used to buy treasury bills. This forced the Chairman, Paul Afoko to set up a committee to look into that allegation. The committee, led by Nana Ohene-Ntow has since submitted his report to Nana Akufo-Addo and maybe the findings and recommendations of the report will be made public tomorrow.

When Nana received his 100,000 pounds and went on his European tour, the next few days later, one darkest moments of the NPP happened. Their Upper East Regional Chairman, Adams Mahama was killed with acid. At the funeral of Adams Mahama, Dr. Bawumia said one life lost in the party was too much and that Adams Mahama’s death should be used as a sacrifice to win both the Talensi and the 2016 general elections. The death of Adam Mahama was followed by a suspension letter to Paul Afoko. Nana Akufo-Addo was in the U.S. when Afoko received his suspension letter. As if the suspension letter was to cool tempers in the party, a group of people demonstrated at the party headquarters calling for the re-instatement of Paul Afoko. The following day, Abubakar Mohammed, 30, was stabbed to death in Asawasi.

The death of Abubakar was also followed by the suspension of four party chairman and a deputy northern women organizer, Hajia Zulfao Amadu. All these happenings took place when Nana Addo was in South Africa for some strange reasons. Are Ghanaians noticing that something unfortunate happens in the NPP whenever Nana Addo travels outside, or is it coincidence?

As soon as Nana Addo landed from South Africa, there are reports that various groups have petitioned the Council of Elders of the NPP to suspend both the General Secretary and the “Acting” Chairman of the party, Freddy Blay.
Finally, there is a new political party coming out of the NPP which has the interim General Secretary, Mr. Listowell Kusi-Poku. The party is New Labor Party (NLP) which has the Hand as its emblem with yellow, red, and white as its colors. All these happenings are going on in the NPP under the leadership of Nana Akufo-Addo.

Fellow Ghanaians, how can all these things happen in aparty under the same leader, Nana Akufo-Addo and yet claim that he can fix all the problems in Ghana? If Nana cannot fix the NPP, he can’t fix Ghana. His leadership has brought two preventable deaths in the party but he is walking around as if he does not know about it. If Nana Akufo-Addo had shown the true leadership his followers want us to believe, this simple problems in the party would not have caused the death of two innocent people.

The unfortunate thing is that the problems that caused those deaths still persist in the party today. Adams Mahama and Abubakar Mohammed are dead because of the reckless leadership of Nana Akufo-Addo and if you are a member of the NPP, pray that you are not the next to go.