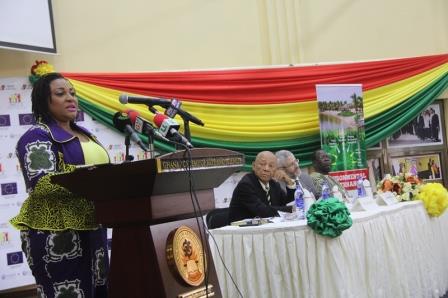 Educating the public on the different dimensions of corruption would empower citizens to eschew corruption in all its forms as well as constructively support to fight the canker.

Citizens also need to be educated on how to demand accountability from their district assemblies and other public institutions, a research conducted by the National Commission for Civic Education (NCCE) said.

The research entitled “Public Perception on Corruption Accountability Environmental Governance” was part of the Accountability, Rule of Law and Anti-Corruption Programme (ARAP) with funding from the European Union (EU).

ARAP is an EU Ghana project that focuses on supporting the National Anti-Corruption Action Plan (NACAP) of Ghana to contribute to the current reform processes in the area of rule of law, accountability, anti-corruption and environmental governance.

ARAP also seeks to support key institutions to increase the ability of citizens, civil society organisations and the media to hold government and duty bearers accountable.

Ms Josephine Frimpong, Chairman of NCCE, speaking at the launch of the research findings in Accra, said corruption hinders the socio-economic development of every nation and emphasised the need to intensify public education against the act.

The Corruption Barometer Index has ranked Ghana the 70th most corrupt country out of 170 countries with a score of 43 out of 100 points.

She said based on that report the NCCE entered into collaboration with the EU to conduct the research, which was critical to understand the causes of corruption in Ghana and to assist the Commission to tailor its education activities to address the issue.

Ms Frimpong said the Commission and other stakeholders would use the findings in citizen’s engagement, adding that everybody had to join the fight against corruption.

Justice Emile Short, a Former Commissioner of CHRAJ, said it was important for people to understand the causes of corruption and how it was affecting every aspect of the economy, so that all could be part of the solution to addressing the issue.

“All of us have a role to play to curb corruption in Ghana and we are to resolve to resist any corrupt act,” he said and urged the public to always report corrupt cases to the proper authorities for action.

He commended the NCCE for the initiative and also the EU for the financial support for the research.

Mr Paolo Salavia, the Deputy Head of Mission of the EU Delegation in Ghana, said corruption was not linked to only EU but a permanent fight across the globe.

He mentioned lack of commitment to report corruption practices by the citizens as one of the major challenges against the fight.

He, therefore, urged the NCCE and other stakeholders to use the findings to engage the citizenry to achieve the necessary results.

Professor Justice Nyigmah Bawole, Associate Professor and Head of Department for Public Administration and Health Services Management, University of Ghana Business School, Legon, said corruption was not about “our culture because in our cultural settings there are rule and law to refuse to take gifts that we do not understand.

He hinted that another area that government needed to pay attention was charcoal burning, which he said was becoming a major issue.

Mr Vitus Azeem, Anti-Corruption Activist, Bongoose Fambasa Consult, said the research was useful and would contribute to the fight against corruption in the country.
GNA/Newsghana.com.gh