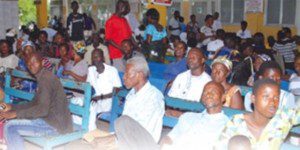 In all about 24 per cent of the health clients seemed to be dissatisfied with health services delivery particularly in the Ablekuma South, Ada East, and Adenta in the Greater Accra Region and the Wa West in the Upper West Region.

These survey findings were made known in Bawku at a day’s stakeholders’ engagement meeting on policy dialogue on health clients’ satisfaction survey organized by SEND-Ghana to find out if health clients were happy with the services provided to them when they accessed healthcare.

The survey was conducted in two selected facilities across thirty districts including Greater Accra, Northern, Upper East and West regions and a total of 2,026 households in the districts were interviewed to assess their level of satisfaction with health workers.

Mr Jonathan Dery, the Project Officer of SEND-Ghana, in a presentation of the findings, noted that significant improvement had been made in the doctor and nurse to patient ratio in the country.

Mr Dery attributed the improvement to efforts made by stakeholders including government to provide quality health services to the citizenry.

He said the high satisfactory rate of health clients was due to health workers such as doctors, nurses and pharmacists among others attentiveness to the clients’ complaints.

He said the survey indicated that nurses scored 68 per cent for being polite to the clients.

Laboratory workers scored 84 percent for maintaining privacy with clients, as respondents indicated that their privacy at the laboratories was very much respected.

Dr. David Azare, the Chairman of the District Citizenry Monitoring Committee (DCMC) in the Bawku area noted that, although satisfaction with service delivery was generally above average, it appeared that some citizens rated quality of care from uninformed positions because of their limited knowledge of their rights to quality health care as prescribed by the patients’ charter.

He said as satisfaction with healthcare delivery influenced a person’s decision to seek medical care, every interaction between health workers and clients had to be done with outmost respect for each other.

He called on the Ghana Health Service to increase education on good customer care and the patient’s charter for its staff, especially those at the records sections.

Dr Azare urged the Ghana Health Service to collaborate with the Civil Society and the Media to raise awareness about the patient’s charter, so as to enhance citizens’ knowledge on their rights and responsibilities.

Participants at the workshop
GNA/Newsghana.com.gh