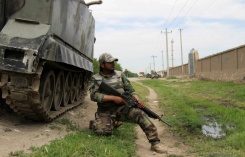 The persistent militancy and violent incidents in Afghanistan amid ongoing peace talks have undermined the hope of many locals for lasting peace in the war-torn country.

“How can we hope for peace when the Taliban group amid peace talks in Doha launched motor bombs in the western Ghor’s provincial capital Firoz Koah on Sunday, claiming 14 lives and wounding over 100 others?” political analyst Khan Mohammad Daneshjo told Xinhua on Monday.

“Majority of the victims are civilians including women and children. If the Taliban want peace it should stop killing Afghans to make the peace talks succeed,” the analyst said. Although no group has claimed responsibility for the attack, many Afghans point finger at the Taliban outfit.

Since Sept. 12, peace talks between an Afghan government delegation and Taliban representatives have been underway in Doha to find a negotiated solution to the country’s lingering crisis. Afghans were hopeful to see reduction in violence with the start of the intra-Afghan dialogue in Doha, but contrary to their expectations, the fighting and violent incidents have increased.

At least 45 fighters with majority of them militants have been killed over the past 24 hours in Afghanistan, according to security officials.

“Taliban militants have to stop killing Afghans and violence in Afghanistan to make the peace talks succeed. Otherwise, the continued war would claim more lives in Afghanistan amid the so-called peace dialogue in Doha,” local analyst Shirzad told local media.

“My hopes for peace have already died because over the past more than a month both sides in Doha have failed to reach consensus on the agenda of their dialogue,” a street vendor Abdul Wasi told Xinhua.