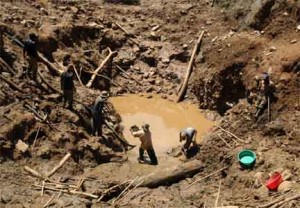 Richard Kwasi Dwumfour the General Overseer of Conquerors Redemption Ministry (CRM), has called on the Clergy and all Religious Leaders to use their Pulpit to support the War Against illegal Mining now accepted in our vocabulary as “Galamsey”

He said: “As a Country, we have danced around this “MONSTER” for far too long and the consequences are the devastating effects on our environment and water bodies as we see it today,

He further stated that it about time we needed “strong will at all levels, to be able to deal with “Galamsey” because it is so pervasive.” He said the fight against illegal mining could only be won if it was considered as a top National Security priority.

Apostle Dwumfour made the call at the sod-cutting ceremony at Nsakina a suburb of Amasaman in the GA- West District were the Church has started its New Branch, which is headed by Rev. Kwamina Taylor.

He called for effective collaboration between the State and the Church in dealing with the menace considering the influence that the church has in society,
thus the church did not exist to meet only the spiritual needs of its members but also to ensure that God’s creations were protected from destruction. This he said was the first assignment God gave man at creation.

Apostle Richard Dwumfour urged the members of the church and the general public to provide useful information on the activities of “galamsey” operators in their vicinity to the security agencies for prompt action to be taken.

He further expressed optimism that the Media Coalition against “Galamsey” would proactively play their part in assisting the ruling Government and the various State Agencies to bring an end to the practice.

He also urged other religious leaders to educate their followers on government’s policies and programmes so as to make their implementation a success.

Real Estate Development 101: Dealing with the Menace of Squatters

Dealing with sophisticated crimes is a shared responsibility – NCCE

Desire to lead is a monster in unionism – GRNMA Vice President

ISA Pantami: The Monster In The Minister