Abraham Nkansah popularly known as Apirigu ChakaPama, President of the most vibrant Die Hard Suporters Union of Ghana says he believes the Black Stars can turn the tables and qualify for Russia 2018. 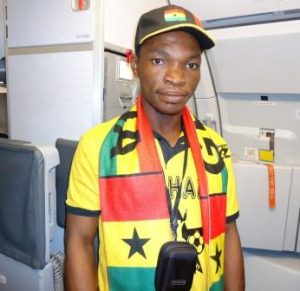 In an exclusive interview with Yours Truly, ChakaPama who has traveled to support the Black Stars with his group said if everything is done well and accurately and timely, the Black Stars can make it a fourth-time record appearance to the FIFA World Cup.

He noted that Ghana has all that it takes to qualify and even win the FIFA World Cup. He gave an example with Brazil 2014 where Ghana drew 3-3 with the eventual winners, Germany at the Group Stage.

He again recollected Ghana Under 20 winning the FIFA World Youth Cup in 2009 as well as the exploits of Ghanaian players all over the world.

For the AFCON 2017 in Gabon, he stressed that everyone knows Ghana is the top favourite and it had been at the last four African Nations Cup Tournaments where the Black Stars come very close, but do not take the cup.

At the last edition in 2015 in Equatorial Guinea, Ghana was beaten at the final on penalties by Cote d’ Voire after the Ghanaians have performed wonderfully and hitting the bar on two occasions.

Abraham Nkansah urged the incoming New Patriotic Party government to support the Black Stars like they did in 2006 for Ghana to qualify to the World Cup for the first time.

He also begged the football authorities to pardon all players who have committed some grievous offences for the Almighty to have mercy and favour on the Black Stars to win in Gabon.

He specially mentioned Sulley Muntari as highly needed in the Black Stars before he retires.

“In fact we need Sulley Muntari. His contribution is great, and he can score goals as well. I think we must pardon him. I call on the Big Men in Ghana Sports to pardon Sulley, so that he can come back. We can all see that the team is not performing well of late” he expressed.