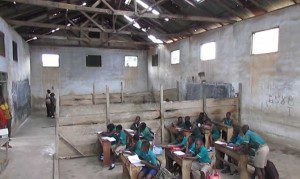 The shed, which has been improvised to serve as classrooms for the past 10 years

After 10 years of using a cocoa shed as their classrooms, students of the Duakwah Catholic Junior High School in the Agona East District of the Central Region face imminent ejection.

School authorities have on a number of occasions been threatened by eviction notices from owners of the shed that the school has partitioned with wood to serve as classrooms for the three classes; JHS one to three.

Headmaster of the school, Paul Sagoe,  told tv3network.com that ?The cocoa company marketing firm which owns the building has been sending us ejection letters so we have been pleading, we are just at their mercies??.

Efforts by the school authorities to get the District office of Education and the Assembly to find them alternative building have proved futile.

According to Mr. Sagoe ??we have taken pictures to the district assembly, some to the education office, some to our local manager? but noted it is only promises that they get from these places without any concrete action.

But some officials at the Agona East District Assembly denied claims of receiving official notifications about the issue hence declined to speak to tv3network.com on the matter.

Meanwhile, TV3?s Central Regional correspondent, Spencer K. Boateng Mensah reports that the condition and atmosphere at the school is not conducive for effective teaching and learning. He says in view of the wooden partition, which is at chest level, the students are mostly distracted by excessive noise from their colleagues in adjoining classrooms. The situation, he reported, is no different when there is teaching going on in the three classrooms simultaneously, noting that the voices of these teachers conflict, making it difficult to concentrate.

Beyond that, the  students and teachers are also exposed to poor weather conditions considering that the shed has no louvres in the windows and due to the poor nature of the roof. ?They are intermittently visited by chirping birds?threats from rainfall bring classes to a halt,? Mensah reported.