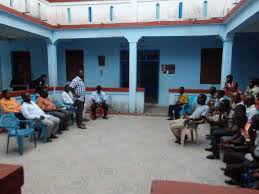 As part of its Medium Term Development plan, the Ellembelle District Assembly is poised to harness the huge tourism potential which abounds in the area to speed up development of the District.

The move, is aimed at making the Ellembelle District, a preferred international tourist destination in Ghana.

The District Chief Executive,(DCE) for Ellembelle, Mr.Kwasi Bonzoh said this when students from the Legon Center for International Affairs (LECIA) visited the Kwame Nkrumah Mausoleum and Museum at his birth and original burial place at Nkroful in the Ellembelle District of the Western Region.

The DCE lauded LECIA for making the Osagyefo Dr. Kwame Nkrumah Mausoleum and Museum high on the agenda of their annual tour in the country.

Mr.Bonzoh observed that tourism was a lucrative income-generating venture and “we need to be serious with tourism as a product”.

He said the Assembly would develop the Kwame Nkrumah Mausoleum to meet international standards.

Mr.Bonzoh said the government was putting the road network in the District in good shape to make tourism attractive and give the industry a major boost in the area.

On her part, a Lecturer at LECIA, Dr.Julian Appiah who led a group of students to the Museum and Mausoleum, called on the Ministry of Tourism, Culture and Creative Arts to manage the Kwame Nkrumah Mausoleum better than its current state to woo more tourists to the area.

She said the Nzema area was rich in tourist potentials but needed to be developed to attract more tourists to the area.

Dr.Appiah said as students of Tourism, it behooved on them to visit various tourist sites of interest to international relations.

This, the lecturer noted, “will give students the sense of judgement on how serious the country is with Tourism.

As part of their tour, the group is expected to visit the Ankasa Rain Forest near Elubo in the Jomoro Municipality and donate bags of uncooked rice to the refugees at Ambainu in the Ellembelle District.