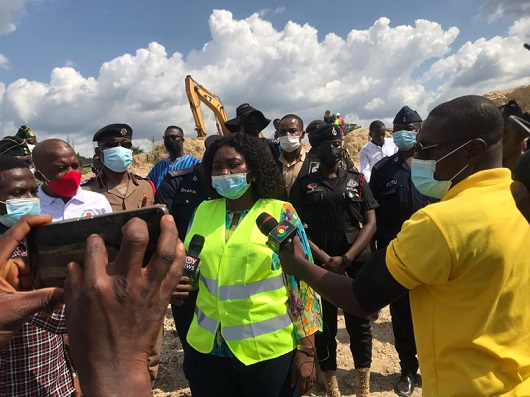 Mrs Justina Marigold Assan, the Central Regional Minister has urged workers at the District and Municipal Assemblies to shun away from party politics at the workplace because it had the potential to trigger violence and disturb national peace.

The practice, she indicated, had gradually become a phenomenon with its attendant negative impact on accelerated development.

“Don’t allow political parties to use you as tools to foment trouble, be neural at work regardless of your affiliation. We must always think about the future first by ensuring that we channel our exuberances into productive ventures,” she said.

The Regional Minister said this in an interaction with workers of the Upper Denkyira East and West Municipal Assemblies to deliberate on challenges confronting them, particularly the fight against galamsey.

Mrs Assan advised the workers to end leaking vital information to the public and ensure confidentiality at their offices as their rules, ethics and law demanded.

She cautioned the workers to be punctual and execute their roles well and avoid destroying government property and resources that affected the budget.

Mrs Assan advised the workers to manage resources well to minimize infraction out of the Auditor Generals reports and also called on stakeholders to identify tourism potentials in their areas, develop, and put much effort to attract investors for the benefit of all.

Mr Kingsley Adjei Boahen, the Regional Director of the Central Regional Coordination Council (CRCC) called on workers to be frontiers of governance within the district to develop the Region as a whole.
He advised them to upgrade their knowledge and skills to promote national development.