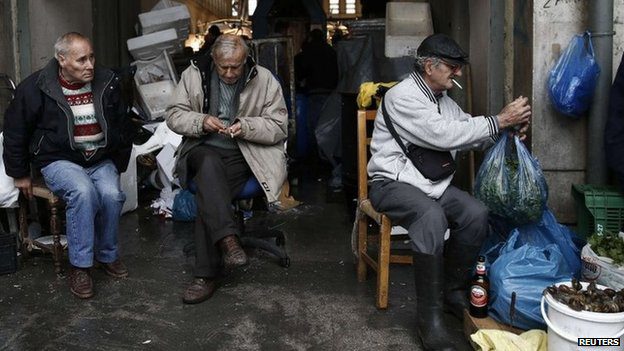 European Commission president Jean-Claude Juncker said the money would be spent on growth and ?social cohesion?.

EU leaders say Greece is due to produce a reform plan to fend off bankruptcy.

Mr Juncker?s announcement came after marathon talks between Greek PM Alexis Tsipras, German Chancellor Angela Merkel and other European leaders in Brussels, on the sidelines of an EU summit.

Mr Tsipras needs EU support for reforms to unlock vital funds, avoid possible bankruptcy and a eurozone exit. The leftist leader has pledged to end austerity ? but his plans have met resistance from Greece?s EU creditors.

Separately, EU leaders at Brussels said they would travel to Tunisia at the end of the month to show their support for the country?s fight against terrorism, after a gun attack at a museum in Tunis killed 23 people, including 20 foreign tourists, many of them from Europe.

EU officials also discussed a response to the growing instability in Libya, and a crisis prompted by the flow of boats carrying migrants from Africa.

He said the EU would provide Greece with ?2bn worth of development funds to boost economic growth, cut youth unemployment and help the poor.

Mr Tsipras said the move was ?a good sign?.

?It was recognized that there is a humanitarian crisis in our country and that there must be a common effort against it ? because it was not the result of some natural catastrophe.?

The funds promised by the EC are not linked to the international loans that Greece has been discussing with the EU.

Our correspondent says Greece will only get those loans once its list of reforms has been evaluated for its impact on the country?s finances, and approved by EU nations.

The current assumption is that Greece has only enough cash to meet all its obligations until sometime next month.

Greece negotiated a four-month extension to its bailout last month after tense talks with creditors.

To persuade the EU of its credit-worthiness, Greece has announced a series of reforms. But it also wants the EU to agree new terms for the long-term repayment of its debts.

If no agreement is reached, Greece risks being unable to meet its obligations. Within the next two weeks alone, it needs ?6bn (?4.3bn; $6.4bn) to pay its creditors.