The 11th European Development Fund has provided 160 million Euros assistance for the modernisation of agriculture to increase crop yield in the Upper West Region. 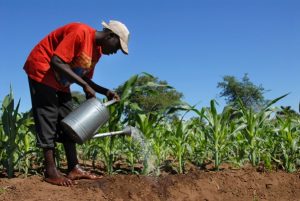 The project would help develop the agriculture value chain and assist in the provision of feeder roads and irrigation facilities as well as building the capacity of people on climate change to turn agriculture fortunes around in the years ahead.

He said apart from the 11th European Development Fund assistance, government was also implementing the “Planting for Food and Jobs” project to change the mode of agriculture production and create about 750,000 jobs nationwide.

This project has been designed to encourage all citizens both urban and rural to take up farming as a full or part time activity.

Mr. Alhassan said the focus of the project was on four key crops, namely maize, rice, soyabeans, and sorghum, as well as the promotion of peri-urban vegetable production.

However, while maize and rice production would cover all the 10 regions that of soyabeans and sorghum production would be concentrated in the Northern, Upper East and Upper West Regions, where the two crops perform excellently.

The provision of improved seeds, fertilizers, extension service, marketing and e-agricultural platform would be covered also.

Mr Alhassan urged the youth to embrace the new projects that government was rolling out to transform local economy and create jobs and enhance food security.

Naa Ansoleh Ganaa, Paramount Chief of the Jirapa Traditional Area, said the people in the communities had turned “Bong-Ngo” which is a cultural practice into tool for environmental protection.

He said negative environmental changes were affecting economic growth and development, and all must take measures to help reduce the negative effects of global environment change.

Naa Ganaa appealed to government to provide Jirapa with a district hospital, pointing out that the Saint Joseph’s Hospital in Jirapa was a church-run entity.

The facility for the past years had not been provided with adequate infrastructure expansion and equipment to enhance quality health care services.

The Jirapa-Naa announced that the traditional council had acquired a 67 hectares of land towards the construction of a district hospital should his request be considered.

He bemoaned the deplorable state of roads in the area and appealed to government to consider rehabilitating them to facilitate the movement of people, goods and services.

He urged government to expand the Jirapa Town Water System to provide adequate water supply to the overgrowing population of the town.

The “Bong-Ngo” festival which is celebrated annually has its root in history and tradition. In the Jirapa and Ullo Traditional Areas, there is the tradition of imposing a ban on the harvest of the dawadawa or locust bean fruit.

“Bong-Ngo” festival simply means imposing a ban on the harvest of dawadawa fruits until they were ripe to be harvested.