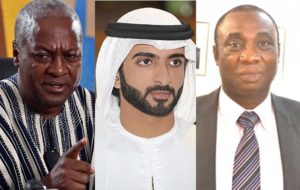 Members of National Democratic Congress (NDC) Minority side on the Mines and Energy Committee on Monday reacted to an unsigned report circulating the media suggesting fraud on their side in the power agreement between the Government of Ghana and the Africa and Middle East Resources Investment (AMERI) LLC. 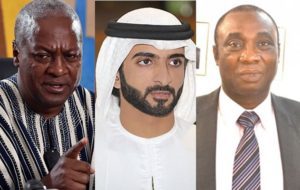 They said they would not ordinarily have commented on the “unsigned documents”, but were compelled “by the public interest and the truth to comment.”

Dr Kwabena Donkor, former Minister of Power and Member of Parliament for Pru East supported by his then Deputy John Jinapor, together with former Energy Minister Emmanuel Armah- Kofi Buah led the group to react to the report at a press conference at the Parliament House, in Accra.

The caucus said the claim by the report that the VRA signed a Letter of Intent with AMERI Energy on 23rd December on sole sourced basis after meeting former President John Mahama and the Crown Prince of Dubai was not true.

Dr Donkor named Mr Philip Addison, the defeated parliamentary candidate of the governing New Patriotic Party (NPP) for Klotte Korle Constituency in Election 2016, Ms Vicky Bright of the Office of the President and Mr Evron Rotschild Hughes of the Office of the Vice President, as the purported writers of the report.
Dr Donkor questioned the basis on the presence of Mr Hughes of the Addison Committee, in the face of a suit against Mr Hughes at the High Court to the Ameri project.

Citing that the unsigned report was politically motivated by the NPP, Dr Donkor said “in a non-political environment, it would have been sacrilegious for this gentleman (Mr Hughes) to have been made a leading Member of a Commission to investigate the AMERI project.”

Dr Donkor debunked claims by the Addison Committee charged to review, restructure and recommend areas of amendment of the Ameri power deal, of fraud by the then Government Team in 2015, after it emerged that Ghana was made to pay $150 million dollars extra in commission to AMERI for the construction a power plant.

In reaction to a claim attributed to the Addison Committee, that it had not sighted any document replacing APR with AMERI, Dr Donkor’s group said there was no such document because “AMERI never replaced APR.”

On the claim by the said report that due diligence was not followed, Dr Donkor’s Group stated that “ the Ministry was happy to leave the due diligence to JP Morgan, the international financial giant that confirmed the Standby Letter of Credit (SBLC).

“JP Morgan only agreed to confirm the SBLC after their own due diligence.

“Parliament also probed the credentials of the AMERI and requested and received the appropriate documentation before approving the Power Purchase Agreement (PPA). And it is important to note that the State of Ghana had no exposure to AMERI at this stage because the risk of procuring the turbines was on AMERI and not Ghana.

On the take or pay contract structure, which the supposed Addison Committee report put the fuel supply risk on the VRA/ Government of Ghana, the Minority Members on the Mines and Energy Committee said “the fact that the Energy project is not Independent Power Producer (IPP), but in a partnership that would result in the takeover of the plant in five years.

“This is not the first time fuel supply obligation has gone to VRA,” Dr Donkor said, adding “in Sunon Asogli Phase One, under the last NPP government, VRA was contracted to supply gas to Sunon Asogli, an IPP.”

The Kwabena Donkor Group wondered why the supposed Addison Committee did not invite the then Minister in Charge of Power or his Deputy to provide relevant information that would help in its works, and registered its commitment to “work with the Government in creating a robust and sustainable Sector to the benefit of Ghana.”

They explained that power outages and their effects do not wear party colours.
GNA