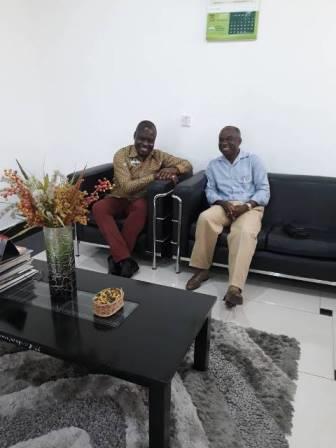 Dr Anarfi Asamoa-Baah, a former Deputy Director-General of the World Health Organization (WHO), is to be appointed as a goodwill ambassador for the Ghana Standards Authority (GSA).

This follows a request for collaboration from Prof. Alex Dodoo, GSA Director-General, during a courtesy call by Dr. Asamoa-Baah on Friday, November 10.

A statement from GSA said Prof Dodoo commended Dr. Asamoa-Baah who joined the WHO as a Senior Policy Advisor to the Director-General in August 1998 for his significant contributions to the UN health body for close to two decades.

Following his initial role as Senior Advisor, Dr. Asamoa-Baah was nominated as Executive Director, External Relations and Governing Bodies in November 2000, after which he was appointed as Deputy Director-General in January 2007.

Before joining the WHO, Dr. Asamoa-Baah was the Director of Medical Services in the Ministry of Health, Ghana.

During the visit, Prof Dodoo and Dr. Asamoa-Baah discussed and explored ways in which the GSA can leverage Dr. Asamoa-Baah’s wealth of experience for the benefit of the Agency and the country as a whole.

Dr. Asamoa-Baah readily offered to share his rich experiences by serving as a goodwill ambassador and consultant to the Agency.

Prof. Dodoo and his guest discussed a broad range of topics relating to standards, consumer protection, training and consultancy.

With respect to the latter, GSA’s Director-General disclosed that past executives of the Agency would soon be engaged to form a standalone consortium to provide various consultancy services.

“I am very pleased with your appointment to head GSA, and will do whatever I can to help you succeed. I am therefore willing to accept your invitation to serve as a goodwill ambassador and consultant to the Agency,” Dr Asamoa-Baah said.

“My passion, post retirement, is to help groom the current crop of professionals for leadership positions and to be a strong advocate supporting an environment that is receptive to learning and mentoring from a broad range of past employee experiences for
the benefit of the Agency”.

Prof. Dodoo thanked Dr. Asamoa-Baah for his acceptance and noted that the arrangement will be formalised at the next GSA Board meeting.

GSA is the government agency mandated to promote standards in the country and aims to become a world-class standards organisation, which is customer-focused. Its primary mission is to protect consumers, facilitate trade and promote industrialisation through
Standardisation, Metrology and Conformity Assessment.