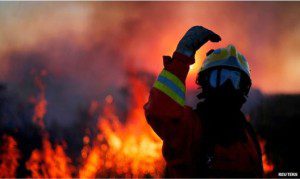 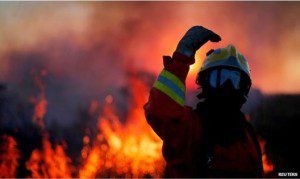 He said 145 others sustained various degrees of injuries in the 644 recorded fire outbreaks.

ACF Owusu-Agyei, who made this known during the 2016 year review meeting of the service held in Sunyani, said 36.3 percent of the fire outbreaks were wild fires, and 35.5 percent of the cases were domestic fires; vehicular fires recorded 12.3 percent and commercial fires 5.1 percent.

ACF Owusu-Agyei expressed discomfort that despite several measures and interventions put in place to control fire outbreaks, Brong-Ahafo was still the second highest region in the country in both bush and domestic fire outbreaks.

He said his outfit would soon form a taskforce to patrol bushfire endemic areas and warned farmers to be mindful in the use of fire.

ACF Owusu-Agyei said last year more than 1,000 fire volunteers in the region were trained adding that the service arrested and prosecuted about 100 fire offenders in the region.

He urged public and private institutions to obtain fire certificates and extinguishers adding that the command would soon engage owners and business risk institutions to develop fire management policies.

ACF Owusu-Agyei said institutions without or with expired fire certificates would be prosecuted in accordance with the provision LI 1724.