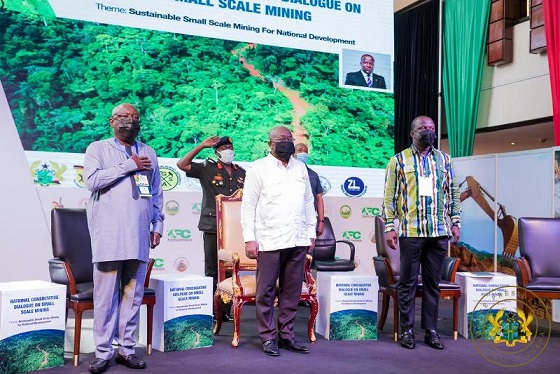 The President said it would require stakeholders in the small-scale mining industry to engage in honest and candid conversations to stem the tide of the menace of illegal small-scale mining, otherwise known as “galamsey”.

He said although mining created jobs and improved livelihoods, it should not be done at the expense of damaging the environment.

“Ghana is not only made up of the people, but the soil, water bodies, valleys, mountains, forests, plants and animal life, without them, we will not survive, and requires our collective determination to protect them,” the President said.

“Ghana is endowed with numerous natural resources and should explore innovative ways to exploit them, without hurting the environment”.

President Akufo-Addo underlined the need to engage in responsible and sustainable methods of mining capable of taking care of the forests, flora and animal life.

The Dialogue is on the theme: “Sustainable Small-Scale Mining for National Development” with an objective to ensure a broad-based consensus and a workable blueprint to promote sustainable mining and stem illegal small-scale mining in the country.

It brought together representatives from the Ghana Association of Small-Scale Miners and Ghana Chamber of Mines, chiefs from the 16 regions, members of the Council of State and National House of Chiefs, among other stakeholders.

The President reiterated his earlier stand to fight against ‘galamsey’ and deal decisively with anyone that engaged in it, irrespective of his or her political affiliation and influence in society.

However, the President said he would not do so based on hearsay or mere allegations.

He pledged his government’s resolve to strictly implement the recommendations from the Consultative Dialogue for the benefit of the entire citizenry.

The Minister of Lands and Natural Resources, Mr Samuel A. Jinapor, expressed optimism that the proposals, ideas and suggestions from the Dialogue would form a workable blueprint to tackle the illegal mining menace.

He said to implement solutions and recommendations from the Dialogue, it would require holistic and collective national efforts anchored on integrity of action to halt the galamsey menace.

Mr Jinapor explained that they would court support from chiefs and mining communities on how to deal with the involvement of foreign nationals in the small-scale mining sector and provide alternative livelihoods for those to be affected.

“We, from the Ministry of Lands and Natural Resources, wish to assure the President of the Republic, participants at the forum, and mother Ghana, that whatever set of measures that will emanate from the deliberations over the course of the next two days, if approved by government, will be implemented diligently, dispassionately and with a great sense of integrity and urgency,” he said.

Mr Eric Asuboteng, the Managing Director of Anglogold Ashanti, who doubles as the President of the Ghana Chamber of Mines, said small-scale mining contributed immensely towards the growth of the Ghanaian economy.

Mr Asuboteng expressed the Chamber’s unflinching support towards the regulation of the small-scale mining sector to ensure sustainable mining practices.

Mt Francis Opoku, the Director of Finance, Ghana Association of Small-Scale Miners, said small-scale mining started in Ghana in 1989 and had contributed substantially towards national development.

The sector had since contributed from two to 35 per cent of the country’s total gold production as at 2020, he said, and expressed the Association’s support towards ensuring responsible and sustainable methods of mining.

He was of the conviction that only certified people should be allowed to mine in the country to safeguard the environment.

Mr Opoku pledged the Association’s support to collaborate with state institutions and government to stamp out illegal and small-scale mining in Ghana.