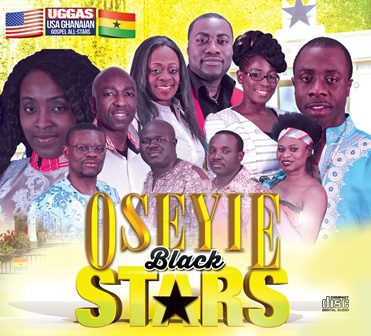 Story: A group of Ghanaian gospel musicians in the USA called the United States Ghanaian Gospel All-Stars (UGGAS) have gotten together to create a song in support of the efforts of the national team of Ghana, the Black Stars, as preparations advance for the world soccer fiesta in Brazil 2014. The song, which is a single, was sung in English and Twi, Ga, Fante and Hausa, all local Ghanaian dialects.
The UGGAS effort is also part of their attempt to bridge the gap between Ghanaian gospel musicians living in both countries in order to foster unity and creation of a healthy environment within which both divides can better represent Ghanaian gospel music. The song is entitled ?Oseyie Black Stars? which in the Akan language of Ghana means, ?to hail? or ?celebrate? the Black Stars.
Andrews Nortey also known as ?Andy Angels?, a Ghanaian Gospel artist based in the US is the brain behind this collaborative effort. His vision was fully embraced and supported by John Dee, a sound recording engineer of McDade studios and Precious Hannah Ewoo a Ghanaian Gospel Star, all of whom are based in the USA and actively involved in the gospel music scene in the diaspora.
In a conversation with?www.OralOfori.com, Andrews Nortey says the sterling performances of Ghana in the past two soccer world cups really fired the desire of the UGGAS to raise more awareness and support for the Black Stars who prepare for the Brazil world cup campaign this June. ?We intend to do this by ?building a united front for all Ghanaian Gospel Stars in the USA to give back to our motherland, Ghana and choosing the Black Stars? Brazil 2014 World Cup campaign was such an appropriate time for a project like this.?
An album compilation is set to be released by the group in March 2014 also titled ?Oseyie Black Stars.? This title track amplifies the Black Stars official 2014 Slogan ?FORWARD EVER, BACKWARDS NEVER? and will be available both on iTunes and Amazon,?CD Baby?and other online stores. Fans can also purchase the CD in Ghana and USA too.
Artists featured on the album are: Andrews Nortey, Precious Hannah Ewoo, Lady Angie, Daniel Osei Bonsu, Esther Efua Yirenkyi, David Arhen, Mavis Tiwaa, Samuel Quaye, Minister Kofi Sey, and Francis Acquah.
United States Ghanaian Gospel All-Stars (UGGAS) call on all to continue to support Ghana at the world cup in Brazil and encourage them to pursue the dream of a much better performance on the global soccer stage. ?We also want you to keep on supporting and spreading the GOOD NEWS and the GOSPEL and pray that all who listen to and purchase this CD receive the gift of salvation through Christ? says Precious Hannah Ewoo of the UGGAS.
Ghana?s Black Stars are placed in Group G of the Brazil 2014 FIFA world cup and will begin their campaign of hope for Africa on?June 16by playing the USA. They will go on to meet Germany on?June 21?and end their group stage encounter with Portugal whom they will lock horns with on?June 26, 2014.