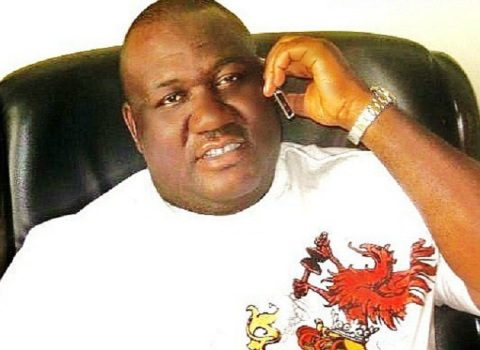 The Speaker of the Imo State House of Assembly, Rt. Hon. Benjamin Uwajumogu, yesterday avoided sitting over fear of being arrested by the members of the Nigerian Police Force, Abuja in connection to the purported court judgment of a Calabar High Court which the House acted upon to conclude that Eze Cletus Ilomuanya was liable to criminal conviction.

His positition was however taken by his deputy, Hon. Donatus Ozoemena, who presided over the House.

It would be recalled that the Imo State Chairman of the All Progressive Congress, APC Hilary Eke, was arrested by the police authorities and arraigned before a Magistrate Court, in Abuja, where he was not only docked for alleged forgery and defamation of character but also detained at Kuje Prisons, Abuja, until stringent bail conditions imposed on him are met before granting him freedom.

This followed a petition to the police by the embattled Eze Ilomuanya over an advertorial the APC chairman placed in national dailies where he claimed that a Calabar Court had convicted Ilomuanya some years ago.

Ilomuanya himself had been having altercation with the Okorocha government since 2011. The governor vowed to dethrone him for practically getting too involved in politics and openly prevented him from being accepted in any community in Orlu Senatorial Zone during the 2011 election that Okorocha eventually won.

Okorocha has since dethroned ILomuanya and replaced him with another person as traditional ruler.

Pique by the public notice placed by Ekeh, Ilomuanya reported to police claiming that Eke be investigated and source of the ?purported? judgment which according to his lawyer does not exist be unravelled.

Aware that Ilomuanya had included the names of the speaker and some members of the state legislature to be investigated by the police, 247ureports.com learnt that Speaker Uwajumogu and about five Members of the House had been alerted that they were likely going to visit police headquarters in Abuja to also explain how they received, acted and confirmed that a petition by one Clement Obodo, later named Ikechukwu Obi, that referred to the said Calabar Court conviction.

Based on the foregoing, a fresh petition was reported to have been filed against the state lawmakers who on December 13, 2011, allegedly adopted a resolution on report of an adhoc committee set up by the Speaker based on the said petition. Ilomuanya?s lawyer may have asked the police to also verify the source of the petition which the lawmakers deliberated on and evidences the House relied on to adopt the report asking the governor to go ahead and dethrone Ilomuanya based on their conviction arising from the petition.
The Uwajumogu led state legislature in a suspicious manner claimed it received a petition from one Clement Obodo alleging that Ilomuanya suffered criminal conviction in a Calabar Court which should disqualify him from holding the position of Obi of Obinugwu Ezeship. The suspicion became rife when the House changed the name of the claimant from the said Clement Obodo to Ikechukwu Obi after Obinugwu people trooped en masse to the Assembly complex to protest the lawmakers? action by stating that no Obinugwu person bears the name ?Clement Obodo?.

On the said day of Dec 14, 2011 day the Assembly members took on the members, it took them only three hours to act on a report of the committee hurriedly raised by the speaker, an action that is averse to due process in the legislature. Members of the committee were Honourables Innocent Ekeh, (Owerri West) Kevin Obioha (Njaba) Adaku Ihuoma (Ahiazu) and Acho Ihim (Okigwe). The committee is headed by member representing Ngor Okpala, Emeka Nwofor.

According to the report of the committee, after conducting investigation, the governor should go ahead based on their conviction of the sanctity of the purported petition as alleged by the Obi.

However, Ilomuanya rushed to court to counter the resolution of the House and succeeded in obtaining judgment through Justice Nnadi who on March 20th, 2013 quashed the decision of the House. Till date, the state legislature has neither challenged the court action nor reacted that their resolution was based on existing facts.

Since the Imo Assembly are regarded as partners in propagation of the purported Calabar Court matter, police men acting on the petition are said to be launching man hunt for the elected members of the House, believed to have been involved in the resolution, a reason it was learnt, the speaker avoided plenary.

Our reporter learnt that one of the members of the committee, Kevin Chino Obioha has been secretly begging Ilomuanya to forgive him for being a member of the committee that pushed in the report, saying he had join for fear of being suspended.