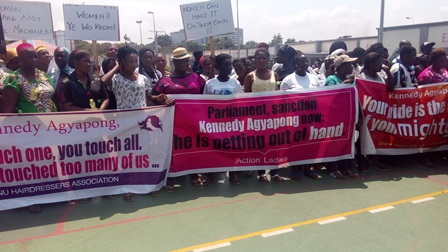 A group of Ghanaian women numbering to hundreds has petitioned the speaker of Ghana’s Parliament Edward Doe Adjao through the women caucus in Parliament. The petition seeks to plead with speaker to call Hon Kennedy Agyapong to order. 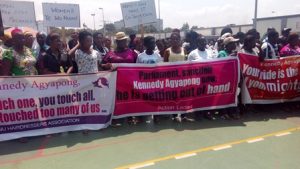 Member of parliament for the Assin Central Constituency Kennedy Agyapong allegedly used unpleasant words on the Electoral Boss, madam Charlotte Osei. He stated that the EC Boss had gotten the position she has now because she exchanged her body it.

There have been many reactions from the public as well as able women.

Leader of the group Hajia stated that for a legislator to pass such comments to a woman is nothing good to write home about. She added that it about time people are sanctioned for unpleasant comments passed.

In reacting to this,member of parliament for the Tano north Constituency Hannah bissiw stated that Kennedy Agyapong wasn’t fair to the EC Boss and women as a whole.

” Every man came out of a woman. We kept them in our womb,give birth to them,breastfed them and trained them to have a sense of humour.We dedicate our time to ensure that they are raised well.”.she added.

Hon bisiw stated that it about time women are given the chance to hold high positions when they are qualified for the position.

“Are we saying that women are not capable of competing with men for high positions in the world? Let stop discouraging our women who have struggled to the top.” He lamented.

She added that once the petition has gotten to the women caucus in Parliament, it will be referred to speaker for the necessary actions be taken.