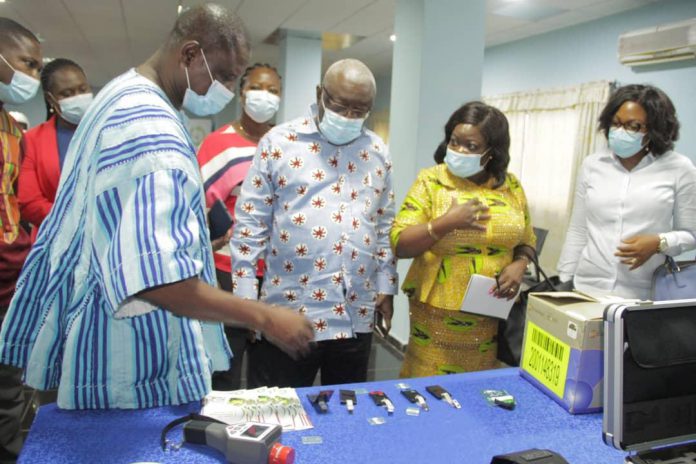 GMOs are organisms whose genetic materials have been altered using genetic engineering techniques.

He noted that his Ministry would collaborate with the Ministry of Food and Agriculture and other key stakeholders to ensure that such a debate was organised to enable Ghanaians to decide on whether to accept GMOs or not.

Dr Afriyie made these remarks on Tuesday during a day’s working visit to the National Biosafety Authority (NBA) and the Nuclear Regulatory Authority in Accra.

During the meetings with the staff of the two Authorities at their respective offices, the Minister interacted with the staff and answered questions from them with regards to their field of activities.

He noted that a lot of people did not understand GMOs’ issues and that for some people had taken an ideological position that interfering with nature was an abomination, stating that however, there were other countries which were increasing their agricultural outputs using that science and technology (GMOs) and that Ghana was trading with them.

The Minister said most of the food inputs from the advanced countries were GMOs, saying, “I am not advocating for GMOs introduction, we must have a debate but the debate should not be based on fears, which have no basis. It should be based on science and what is even good for this country; so, that we can make informed decision”.

The Minister reiterated that biosafety and biosecurity issues of GMOs should also be looked into in making such an informed decision.

Dr Afriyie said Ghana could not develop as a nation without science and technology, and paying proper attention to the environment.

He urged scientists and academicians to consider entering into politics so that they could contribute in making the correct decisions, which comes in the form of legislation and regulations.

He said the NBA and the NRA were both in their formative years, and that they must build strong institutions with a culture, declaring that it was institutional cultures which made countries proud.

Dr Afriyie reiterated that the way to build a nation was to have strong institutions, which would outlive the present generation.

He said in their (the Minister’s) generation, there were lapses but they would bequeath the country to the young generation, which must take the mantle of sacrifice, so that those behind them could have things a bit easy in life.

He noted that the list of members of the governing boards of all institutions under his Ministries would be released in two weeks’ time.

Currently, the NBA and the NRA are housed by the Ghana Atomic Energy Commission (GAEC).

Mr Eric Amaning Okoree, Chief Executive Officer, NBA, and Dr Nii Kwashie Allotey, Director-General, NRA, both appealed to the Minister for support in putting up a Head Office Complex for their respective Authorities.

Mr Okoree said the NBA’s focus for the year 2021 was on activities such as on permits for GMOs research activities and the translation of the Biosafety Act into local languages by the Bureau of Ghana Languages.

On his part, Dr Allottey mentioned
some of the challenges NRA was facing as a limited number of staff to carry out all the Authority’s work tasks.

He noted that the Ministry of Finance had given them financial clearance for some recruitments, however, there was still the need for more staff.