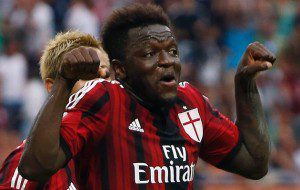 Muntari exhibited what the GFA described as troublesome behaviour during Ghana’s participation at the 2014 FIFA World Cup in Brazil. He was suspended indefinitely from the Black Stars after ‘an unprovoked physical attack’ on Black Stars management member Moses Armah Parker at the tournament. However, two years after the incident, he officially wrote a letter of apology on Tuesday June 7 to the GFA and Ghanaians. In addition to the apology he declared his readiness to play for the Stars again any time he is called.

Based on the premise above, I think GFA needs to consider the apology letter of Sulley Ali Muntari and forgive him but he should not be allowed to make an appearance at the 2017 Africa Cup of Nations (AFCON) in Gabon.

I believe one may asked why I am saying so. Well the reason is that, the 31 year old central midfielder, who plays for Saudi Arabian club side Ittihad FC has been one of Black Stars most influential players since making his debut for the Stars on June 17, 2002, against Slovenia, but on countless occasions, Sulley had misconducted himself against coaches, Black Stars management members and Ghanaians as a whole.

Therefore, I believe the apology letter is just a gimmick because he’s noted for such apologies after misbehaving. He has a track record of indiscipline. He was once dismissed from the team during AFCON 2010 in Angola, but turned a new leaf before South Africa 2010, which led to his inclusion in that final squad for the World Cup.

This same Muntari had a problem with former Black Stars coach Milovan Rajevac at the 2010 FIFA World Cup, He allegedly insulted Milovan following his decision to bench him in Ghana’s match against Serbia and Australia. A report, according to German Newspaper Kicker claimed. Rajevac reacted timely by sending Muntari home after discussing the matter with the GFA.

In 2013, he was suspended again for showing gross disrespect towards former Black Stars coach Kwesi Appiah over his substitution in a World Cup qualifier against Lesotho in Maseru. Nonetheless, he again apologised and was considered for the Egypt vs Ghana game, which eventually led to his inclusion in the squad for Brazil 2014.

Then in Brazil he attacked a Black Stars management team member, Moses Armah Parker over outstanding player appearance fees. This time he failed to render an apology on time, which led to his exclusion from the Black Stars squad for the 2015 AFCON in Equatorial Guinea. He even turned down an opportunity to air his side of the story by declining an invitation to appear before the Presidential Commission of Inquiry.

Now, after two years, he has seen the need to render an apology to the GFA and the nation as a whole and his readiness to play for the Black Stars again.

This has raised many concerns from sports analysts and Ghanaian football fans. Most football lovers in the country are of the opinion that he should be forgiven but not to include him in the upcoming AFCON in Gabon.

Munatri is a talented player which is not in doubt, but he should not be selected for AFCON 2017 because the team has moved on without him and those who took his place are doing well. There is no need to rock the boat. The Black Stars now is a solid team.

I know people have different opinions and would argue that Sulley is still in good shape and has a lot of experience so why single him out for punishment. I have heard others saying that the coach has the final say on this issue and that if he feels Sulley will be needed for AFCON 2017 he should not hesitate on inviting him.

I personally think we have a young and winning team. Muntari is now in his 30’s and cannot play forever. So we need to trust the young generation to carry on without the old generation. We need to move on from the Muntari-Essien-Appiah generation and focus on this generation of stars.

Well, the power lies in the hands of Coach Avram Grant but I think Muntari’s case has become unbearable now, he should be excluded from the upcoming AFCON and be monitored for some time to see whether he is really remorseful for his action so that we can give him another opportunity, may be for the 2018 FIFA World Cup in Russia.

Again, it’s clear that Ghana has already built the Black Stars with young players such as Christian Atsu, Andre Dede Ayew, Wakaso Mubarak, Frank Achempong and Afriyie Acquah for AFCON 2017. Muntari’s position had been sealed by these players. So the question is, who is he replacing?