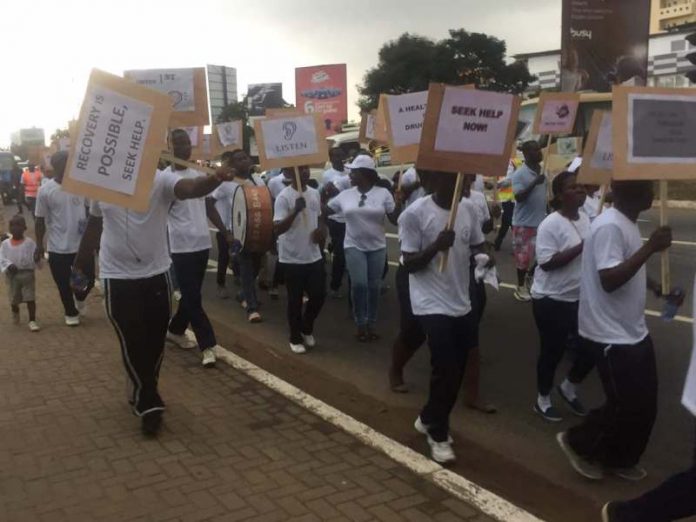 The Narcotics Control Board (NACOB) on Saturday embarked on a health walk to create awareness on the dangers of illicit drug trafficking and to commemorate this years’ World Drug day, which falls on June 26.

The 2017 World Drug Day also known as the International Day Against Drug Abuse and Illicit Trafficking celebration is on the theme: “Listen First – Listening to children and youth is the first step to them grow healthy and safe.”

The participants, which included Executive Directors and staff of the Board walked from the Accra Mall through the El-wak Stadium and continued to the NACOB office at Airport.

By way of creating awareness, some participants carried and displayed placards with various inscriptions to inform the public of the dangers of engaging in drug abuse as well as the possibility to recover.

Some inscriptions on the placards were: “Recovery Is Possible; Seek Help, Listen 1st, Seek Help Now, Drug Addiction Is Health Problem, I Do Soccer; Not Drugs, There Is Hope and Stop – Stop Drug Abuse.”

In an interview with the Ghana News Agency, Nana Osei Nkwantabisa, the Head of Communications and Media Relations said this year’s National Drug Day would be observed in Akim Oda of the Eastern Region but each would hold its own celebration.

Mr Ambrose Dery, the Minister for Interior would be honouring the occasion. Mr Nkwantabisa said as part of activities to mark the day, illegal drugs were destroyed at Bundase on Thursday, which was followed by the health walk and the final observation on June 26.

The World Drug day, is a day set aside each year to raise awareness of the dangers associated with illicit drugs.

The day was set as an outcome of a United Nations’ General Assembly resolution on December 7, 1987 as an expression of its determination to strengthen action and cooperation to achieve the goal of an international society free of drug abuse.