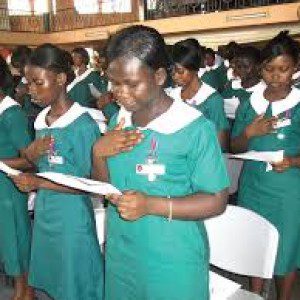 Mr Felix Nyante, Registrar of the Nursing and Midwifery Council of Ghana, has said a feasibility study towards the introduction of an award scheme to recompense nurses and midwives who demonstrate exemplary professionalism is near completion.

He said the award, which would take a national character would be modeled alongside others like the teachers’ and farmer?s awards to motivate professionals.

Mr Nyante said these in a statement to commemorate the 40th Anniversary of the Midwifery Training College, at Hohoe.

He said the Council remained committed to its regulatory duties and had intensified supervisory roles to ensure that the required standards of education in its training institutions were guaranteed.

The Registrar charged health institutions to strictly enforce the service code of conduct and disciplinary procedures with the view to curbing the rising spate of indiscipline and attitudinal shortfalls.

Mr Nyante said the Millennium Development Goals (MDG) Four and Five would not be achieved without a dedicated, diligent, competent and efficient nurse and midwife.

He said statistics showed that about 300,000 women died annually from preventable causes in pregnancy and child births because they had no access to skilled care providers.
?The seriousness of this situation is that almost two-thirds of these deaths can be prevented, if, women had access to an educated, regulated and well-equipped midwife,? he stressed.

He said that the Council was stepping up efforts at staff upgrading in ethics and legal issues in Out-Patient-Department (OPDs) and ward management for nurse managers with 1,430 nurses, midwives and nursing assistants re-oriented about their relationship with clients and patients throughout the country.

The Registrar said as part of the campaign, helplines (0501333237; 0501291528 and 0501291529) had been introduced to enable patients, clients and members of the public to seek assistance, when they encounter challenges with nursing and midwifery practitioners across the country.