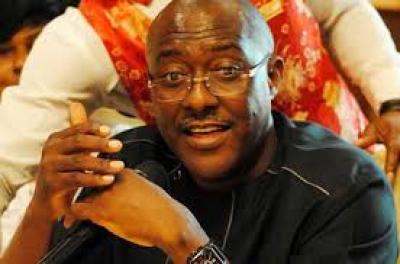 The All Progressives Congress (APC) in Rivers State has called for the arrest and prosecution of the National Publicity Secretary of the Peoples Democratic Party (PDP), Chief Olisa Metuh, for inciting members and supporters of PDP to violence. Rivers APC made the call in a statement issued Thursday in Port Harcourt by the State Chairman, Dr. Davies Ibiamu Ikanya. Ikanya in the statement drew the attention of security agents to Metuh?s violence-inciting utterances while expressing his party?s frustration over APC?s decision to approach the election petition tribunals to retrieve its governorship mandate wrongly awarded to PDP candidates in Rivers, Akwa Ibom and Delta states.

?Olisa Metuh clearly crossed the line while addressing journalists in Abuja on Tuesday. His threat that PDP members across the country are willing and ready to take the laws into their hands if necessary to defend the party?s fictional mandate in Rivers, Akwa Ibom and Delta states is obviously a call to violence. Metuh should be invited for questioning by relevant security agencies and prosecuted for his vitriolic utterances,? Iknaya said.

Continuing, he said: ?Metuh must be called to order. There is no basis for his inciting statement. APC, as a law-abiding party, is challenging the outcome of the so-called elections in the states mentioned through the only channel provided by law. So where is the basis for his call to violence? The time for PDP impunity is over. Metuh must be made to face the consequences of his reckless utterances.?

Rivers APC vowed that it would neither bow to blackmail nor be intimidated in its quest to use legal means to oust the impostor governor-elect, Chief Nyesome Wike, as his declaration by the Independent National Electoral Commission (INEC) is nothing but daylight robbery. ?We are with the good people of Rivers State and we shall stop at nothing to ensure that the mandate which they freely gave to the APC and our gubernatorial candidate, Dr. Dakuku Peterside, is recovered through the due process of the election petition tribunal,? the party said.

It advised Metuh and other PDP leaders ?who have ingloriously turned PDP from a national ruling party to a wobbling opposition regional party to concentrate their energies on how to rescue the fast-disintegrating party or watch it further nose-dive into a two-state party by 2019.?