News Ghana
Home News Over 400,000 in Volta to get potable water 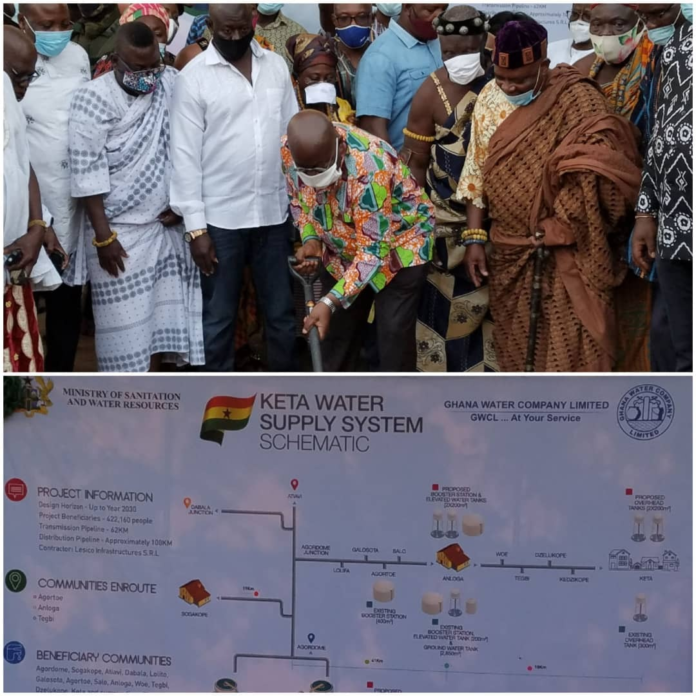 President Nana Addo Dankwa Akufo-Addo, has cut the sod for the commencement of works on a Keta Water Expansion Project to provide potable water to over 400,000 people in three districts in the Volta Region.

The 85 million Euro project financed by the Deutsche Bank, will see the rehabilitation of the existing water treatment plant at Agordome in the Central Tongu District, and the construction of a 7.7 million gallon conventional treatment water facility.

A 62-kilometre transmission pipeline would be constructed through Anloga to Keta, and also a booster station and storage reservoirs.
About 100 km of distribution networks would be constructed in addition to the rehabilitation of existing ones, and 8,000 domestic meters will be supplied to serve communities in Keta, Anloga, and the Tongu districts.

President Akufo Addo noted that the “long overdue” project would affect economic growth along the fast growing seaboard, and said his government was not “relenting on efforts to provide water for all Ghanaians, regardless who they were.”

“With water, investors would take advantage of the IDIF and other policy initiatives to create employment for the youth and stimulate the growth of the local economy,” he said.

The President said some key road networks in the districts were awarded for construction, adding that funds were being sought to dredge the Keta Lagoon.

Madam Cecilia Dapaah, Minister of Sanitation and Water Resources said the government in its pursuit of the water sustainability goals of the SDGs, was closing the gap between demand and supply through “steady” water infrastructure investment.

She said the efforts had among others, resulted in zero recorded cases of cholera since 2017, and also helped over 5,000 communities end open defecation.

Israeli infrastructure company, Lesico would undertake the project in the space of two years. Togbui Kwawu Adzowe VII, the Awudada of Agave Traditional Area, commended the government for the intervention, and lamented the long quest for potable water by communities living along water resources.