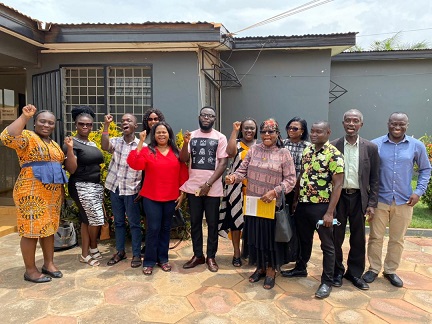 ABANTU for Development and its partners have reechoed the need to pass the Affirmative Action Bill into Law in order to remove discrimination against marginalized groups, who have been historically disadvantaged in the country.

Since Article 35(5) and 35(6) of Ghana’s 1992 Constitution, under the Directive Principles of State Policy enjoins the State to actively promote the integration of all citizens and prohibit any form of discrimination on the basis of gender, in order to achieve gender balance.

The Affirmative Action Law will also address women’s historically low representation in all decision-making spaces, while simultaneously encouraging democracy and development through effective engagement of all people, particularly women.

In addition, it seeks to promote women’s representation to a minimum of 40% in all policymaking spaces.

The Convenor of Women Manifesto Coalition, Hamida Harrison who made this known during a media engagement in Accra, said the law is a guaranteed way to increase women’s representation in decision-making spaces such as Parliament, District Assemblies, Ministerial and Ambassadorial appointments, and other areas of governance in Ghana.

Over the years, elections have proven to be unable to ensure equality in the representation of women and men. Unfortunately, there appears not to be the desired push to have the Bill passed into law.

This she said, the government has made several promises to get the Bill passed in 2017 and 2020, yet none of these promises has materialized.

Stressing that, the country cannot progress unless women are mainstreamed or gender equality is incorporated into the development process.

According to Hamida Harrison, research has proved that countries cannot reduce poverty or build their human capacity; without the promotion of gender equality.

Development debates including global economic frameworks like the Sustainable Development Goals (SDGs) are placing the issue of equal participation in public life as a core concern in the struggle for social justice and economic sustainability.

To ensure inclusive political participation, especially that of women, specific equality mechanisms are required to overcome the barriers of long-entrenched gender discrimination and inequalities that are reinforced by socio-cultural traditional prejudices, beliefs, and perceptions.

According to the organisation, with the country’s desire to institutionalise democratic political systems built on the principles of equality and inclusiveness, Ghana must include the immediate passage of an affirmative action law as an integral part of this conversation.

She also lauded the media for their unflinching support over the years and entreated them to continue championing the cause since their role remains crucial to nationwide development, specifically women’s participation in national governance.

ABANTU for Development and PLAN International also urged the media to use all available research and statistics from academia and civil society on the low representation of women in governance in Ghana to increase public awareness, and advocate for citizens’ interests. And also, garner support for the immediate passage of Ghana’s Affirmative Action Bill into Law.