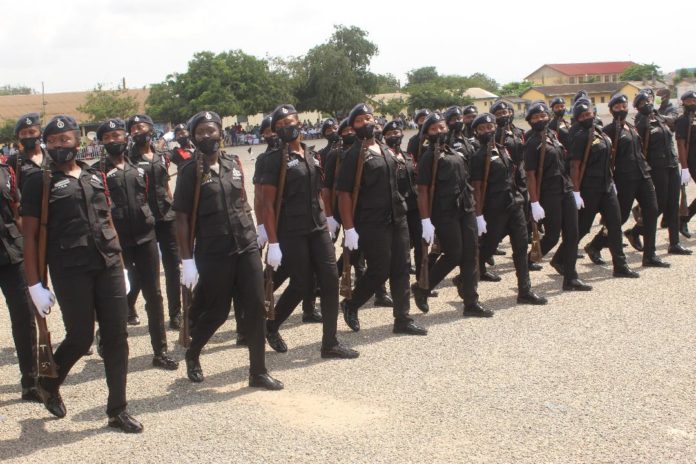 Deputy Commissioner of Police (DCOP) Edmund Ohene Bosompem, the Commanding Officer of the National Police Training School, has cautioned newly recruited police personnel against political discussions at workplaces and barracks ahead of the December polls.

Mr Bosompem advised the recruits to be professional and execute their duties impartially irrespective of their political affiliation to win the confidence of the public.

“The Police administration will not overlook any act of misconduct and public intimidation exhibited by any member of the Service. You will always be held accountable and responsible for any degree of indiscipline and lawlessness,” he said.

The Commanding Officer gave the caution on Friday at the passing out parade of the sixth batch of 198 recruits in Accra, of which 75 were males and 123 females.

He charged the recruits to be circumspect in discharging their responsibilities and always work within the confines and dictates of the Constitution, the Police Service Act of 1970 and the Police Code of Ethics.

“You must strive to win the confidence of the masses by your actions and the manner you handle cases, treat complainants and suspects because they are always welcomed at the Police station and not to be intimidated” Mr Bosompem,” said.

He advised them to refrain from illegal activities for personal gains and work towards developing their talents.

Mr Bosompem said anyone caught flouting the regulations would be subjected to Police Disciplinary Proceedings and punished accordingly, when found guilty.

He said the recruits would be on 18-month probation and be monitored and assessed on the standards of regulations of the Service.

The period of probation, the Commanding Officer, said was considered as part of the practical training and urged them to work towards meriting the wearing of the badge of honour.

“Your confirmation as efficient Police Officer after the probation period depends on your good conduct, loyalty and commitment to duty and General compartment”.

The recruits went through intensive five months basic Police training to operate in line with the International Standards of Democratic Policing.