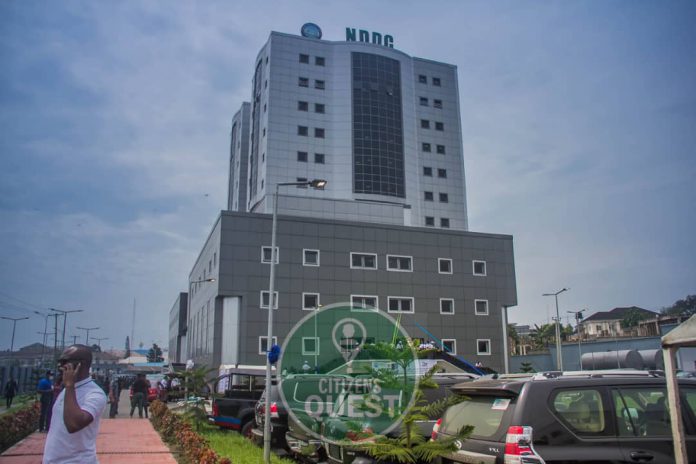 It was a thing of joy as the newly built NDDC headquarters situated on the Eastern bye-pass axis of Rivers State was commissioned by the President and Commander-in- Chief of the Armed Forces, Muhammadu Buhari.

The above expression was contained in a statement circulated to journalists by Citizens Quest for Truth Initiative CQTI, a non-governmental and an accountability advocacy organization.

The Citizens Quest crew who were led by her President/Convener, Chief Obiaruko Christie Ndukwe who covered the event, said the commissioning ceremony was attended by the crème de la crème in society, ranging from top politicians, captains of industry, leaders and youths of the Niger Delta Region and traditional rulers.

The President, who was represented by the Minister of Niger Delta Affairs, His Excellency, Senator Godswill Akpabio, in his remarks, commended the new leadership of the Commission for bringing to fruition the dreams of the Niger Delta people with the completion of the magnificent edifice after 26 years the foundation stone was laid. This, the President noted was as a result of the massive corruption that had bedeviled the Commission during the period.

In the words of the Minister “you all will recall that until the completion of the project, the NDDC was paying 300 million naira annually for its rented headquarters.

You will also recall that In 1994, when the groundbreaking for the NDDC headquarters was carried out it was OMPADEC at the time.

Twenty six (26) years, and with 17 Chief Executives later, it has fallen on President Buhari to COMPLETE and COMMISSION the NDDC HQ building says Senator Akpabio.

On his part, Senator Akpabio revealed that “When I was appointed Minister of the Niger Delta, Mr. President gave marching orders that this project must be completed… It is another milestone which evidences the commitment of Mr. President to the development of Nigeria particularly the Niger Delta region.”

The minister also went ahead to reveal the corruption that had plagued the commission before the arrival of President Buhari. “I want to also tell us that for 15 years the rented NDDC headquarter was not connected to the national grid, so they can give out contracts for diesel. That became a racket on its own.”

Minister Akpabio also said that when he visited the NDDC building project site after he became Niger Delta Minister in 2019, he was told that no Minister or Chief Executive of the Commission has ever visited the site since 1996.

Citizens Quest is very proud to be part of this achievement in record time.