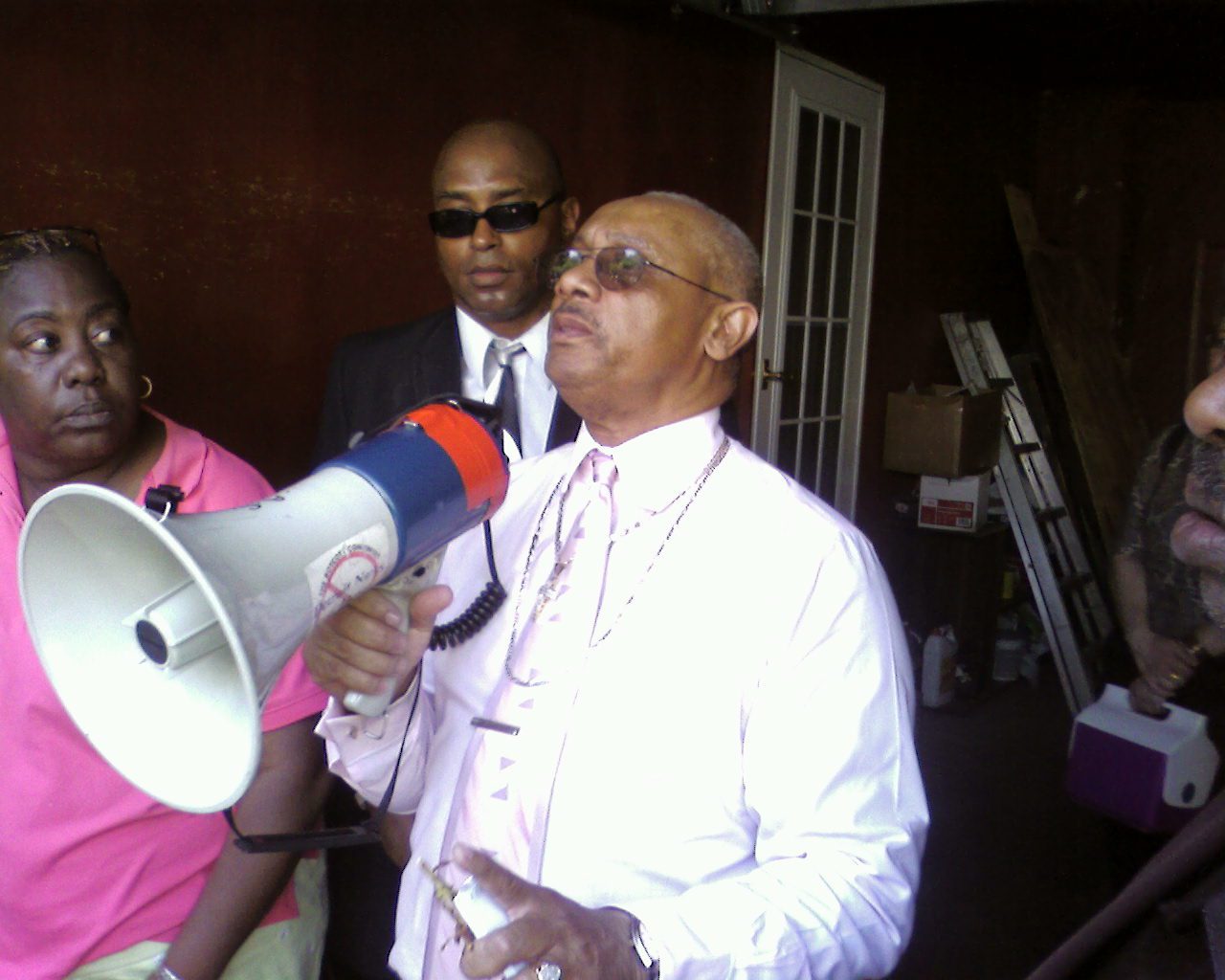 After winning national support during 2007-2009 in efforts to fight trumped-up charges for alleged election irregularities, Rev. Edward Pinkney has once again been indicted for his tireless work to make public officials in Benton Harbor, Michigan accountable to the people. Rev. Pinkney was placed under house arrest after he turned himself in to the local authorities in late April.

The day before the leader surrendered to the Berrien County courts, a SWAT team had visited his home blocking the entire area throughout the neighborhood. Rev. Pinkney was not at home when members of the Benton Harbor Police, County Sheriff Deputies, Michigan State Police and possible federal agents sought to apprehend him without his knowledge.

Rev. Pinkney was spearheading a recall election campaign to remove Mayor James Hightower. The Mayor was being accused of being a willing operative of Whirpool Corporation, a major powerbroker in the area.

As a result of his organizing work, he has been indicted on five felony counts and six misdemeanors. The charges could result in fifteen years in prison if he is convicted.

The County Prosecutors claim that Rev. Pinkney forged signatures on recall petitions. The community leader denies the charges and says he was only committed to the removal of Hightower and the election of a replacement namely City Commissioner Marcus Muhammad.

Despite these indictments, Rev. Pinkney remains confident that he will prevail against these most recent attacks. He says that the evidence against him is manufactured and provided the pretext by the county courts to stay the elections to recall Mayor Hightower that was scheduled for May 6.

Rev. Pinkney has been an outspoken critic of the system of Emergency Management which under both the previous Gov. Jennifer Granholm and the incumbent Rick Snyder has placed African American and working class municipalities under the total dictatorship of the banks and corporations. The population of Benton Harbor is 89 percent African American and has dropped off to approximately 10,000 residents.

Benton Harbor was one of the first municipalities to fall victim to the so-called Emergency Manager Law, where cities can be placed under the direct administration of the state government in order to enforce austerity measures that lay-off public employees, liquidate public assets and close schools. The city was hit hard by the foreclosure crisis and production at the Whirpool facilities was reduced to almost nothing.

With the exception of three working class suburban communities outside of Detroit, the cities which have been put under emergency management have had majority African American populations such as Flint, Detroit, Inkster, Highland Park and Benton Harbor. A statewide petition campaign and referendum, which Rev. Pinkney played a role in, overturned the Emergency Manager Law but it was re-imposed by Gov. Snyder and right-wing Republican-dominated state legislature in late 2012 during a lame duck session.

Rev. Pinkney through the Black Autonomy Network of Community Organizers (BANCO) has been mobilizing people throughout Berrien County for over a decade. BANCO in Benton Harbor was formed in the aftermath of the death of an African American motorcyclist in June 2003 during a police chase. In response to the death, the African American community in the city rose up in four days of rebellion.

The Michigan State Police were deployed to put down the rebellion and the-then Gov. Jennifer Granholm, a Democrat, pledged to help the city through the creation of jobs and community programs. Nevertheless, the social conditions within the city worsened and public assets were later turned over to business interests for a widespread gentrification and re-location program aimed at the African American community.

In a campaign to stop the forced removals of the African American community, BANCO attempted to recall several City Commissioners in 2007. For their efforts, Rev. Pinkney was falsely charged with ?buying votes? and convicted with questionable testimony.

He was convicted and placed on four year probation with another year in jail which could be served under house arrest on a tether. Later during 2008, as a result of an article Rev. Pinkney published in a left-wing newspaper the People?s Tribune based in Chicago, a judge in Berrien County ordered him imprisoned for allegedly threatening the life of his sentencing judge, sending him to several state prisons throughout Michigan for an entire year.

Rev. Pinkney gained national support and was able to successfully appeal the charges and win release during 2009. He continued his organizing work in Benton Harbor through both BANCO and a local chapter of the NAACP.

Delegations to Travel to Benton Harbor on May 24

Jean Klock Park had been set aside decades ago for the use of the population of Benton Harbor. The city was a magnate for migrants from the South and other parts of the country during the industrial area of the early and mid-20th century.

During the same period that Rev. Pinkney was being prosecuted and imprisoned in Berrien County, Jean Klock Park was turned over to private interests known as Harbor Shores and made into a golf course where the PGA Tournaments have been held since 2012. An ?Occupy the PGA? series of marches and rallies were held during May 2012 which attracted hundreds of people from the community and around the state as well as the country.

On May 24, the PGA will once again hold tournaments in Benton Harbor at the now renamed Jack Nicklaus Signature Design Golf Course. Hundreds of millions of dollars were invested in the golf course which is near the beaches of Lake Michigan where homes surrounding the waterways have been refurbished while the African American community, the majority, is being systematically forced from the city.

Activists in Benton Harbor are asking people to come out to protest the PGA Tournaments to highlight the ongoing racial and class injustices in the city and surrounding county. Many organizations in Detroit and other parts of the state are committed to supporting Rev. Pinkney.

The Moratorium NOW! Coalition and the Michigan Emergency Committee Against War & Injustice (MECAWI) passed a resolution at their May 12 meeting supporting the defense of Rev. Pinkney and calling for the charges to be dropped. Activists from Detroit are planning to attend the Occupy the PGA 2014 demonstrations on May 24.

Organizers in Benton Harbor are asking supporters to gather at City Hall located at 200 Wall Street beginning at 10:30 a.m. A press conference on the situation in the city will be held at 11:00 a.m.

Ghana Could Get 5.7% Income Boost Under AfCFTA – World Bank Projects

68,000 jobs to be created under YouSTART initiative in W/R