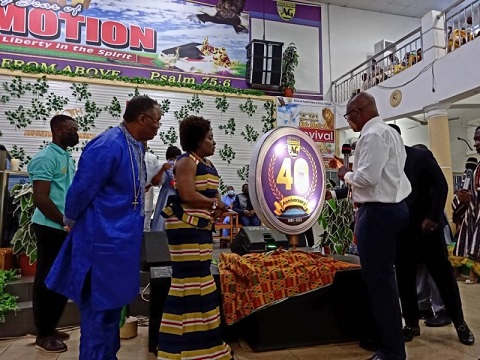 The Revival Assemblies of God Church, Hohoe has launched its 40th Anniversary celebrations.

The launch was on the theme: “40 years of Revival and Transforming lives.”, and the anniversary, slated for Sunday, February 27, 2022.

Apostle Dr Ernest Narh Adulai, the Head Pastor of the Church described the 40-year journey as a “journey of great learning and one which was directed by God and the Holy Spirit.”

He said the journey was a worthwhile one, raising youth in nation building, affecting society with change of attitude and ways of thinking.

“Few people you meet that passed through here, you will see that they are different be it men, women, or even pastors and they are just different.”

Apostle Adulai said his closeness to and walk with God sustained the Ministry.

“Those who are close to me will tell you my life is a life of prayer, faith and God’s work.”

He said from the look of things, it was showing that most pastors going “wayward” do not know the word and with recent happenings, it showed that the church was not affecting society but just a place to come and socialise without an inner transformation.

Apostle Adulai noted that there was the need to raise the banner and standard of Christianity and called on servants of God to focus on transforming attitudes and changing society.

He said a problem being faced recently was lack of love for the nation and people who assumed offices especially in politics do not sacrifice nor serve the nation but for other reasons adding that “nationalism is not there.”

The Head Pastor said the Church in collaboration with stakeholders had plans to help the Municipal Hospital, offer more scholarships and build a new youth church to nurture the youth.

Mr John-Peter Amewu, Minister of Railways Development and Member of Parliament (MP) for Hohoe Constituency, said it was expected that messages from the Church’s pulpit reflected in the lives of its members who would serve as ambassadors of Christ not only on Sundays but at workplaces and communities.

“The church is doing a lot to change lives but I think we need to do more by preaching the gospel of attitudinal change from the pulpits of this country.”

Mr Amewu said there was the need to eschew the quick money syndrome and accepted that hard and honest work paid if the country needed to develop.

He said since the government was doing its best to provide jobs for the youth and extend needed social amenities to the people, the churches needed to compliment the efforts.

The MP said this could be done by preaching to members on the need to treat the employer’s property as theirs, respect the elderly and always be patriotic.

“If Christians engage in stealing and all manner of ways that society frowns on, then there is a disconnect between Christian principles and Christian living.”

Mr Amewu said the preaching of the gospel must no longer be abstract but using the Bible to evaluate lives on a daily basis adding that “only then can our good conscience become sensitive enough to convict us when we go wrong.”

Reverend Gabby Dzisa, Senior Pastor of the Christian Centre Assemblies of God, Tema, commended the Church for its existence and lives impacted.

In a sermon, he called on Christians to have faith in God and never despise their statuses in life.

Togbe Kutor VIII, Chief of Ahado, noted that the existence of the Church till date was as a result of cooperation, sacrifice and total commitment.

He said the Church had helped the people of Ahado with the gospel and further helped the community with access to water through the construction of a water facility which was of immense help.

Togbe Kutor said the growth of the Church and the edifice had also added beauty to the Ahado community.