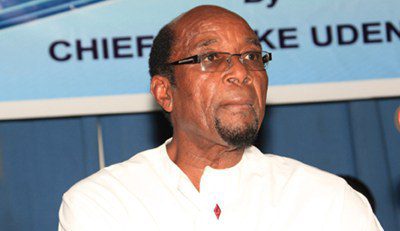 The shameless sale of Igbo presidency and Igbo interests by Ohaneze to the highest bidder has attracted the frank opprobrium of Senator Uche Chukwuerije. In a submission he sent to the Igbo Elders,South East Governors, and members of the 11 man committee set-up by the South East Governors on 27th January towards resolving the Ohaneze crisis , Chukwumerije warned that as 2015 approaches, there will be more massive attempts to bribe the body . A copy of his submission was given to Rev Obinna Akukwe the Director of Media of General Assembly of all Igbo Christian Organizations and Ministers (GAAICOM), and one of the initiations of the exclusive two year tenure extension granted to the late President of the body, Ambassador Raph Uwechue, the misuse of which has brought crisis to the body. This document, meant for the South East Governors, Elders and Clergy was made public in April 2013 by the authority of Igbo Bishops and Pastors under the aegis of GAAICOM and exclusive permission of Senator Chukwumerije. The Senator was also advised to also make it a public document for posterity purposes, which he later did.

According to Senator Chukwumerije,??The increasing heat of 2015 politics, already smoldering, will reach its zenith in 18months time, bringing in its train even more massive attempts than hitherto to buy off the corporate integrity of Ohanaeze?? .

He dismissed the election of January12th as a farce and called for fresh elections or the setting up of a Council of Elders to supervise the present leadership for only one term . According to the Senator ?? The lethal potential of the ripples of the electoral farce of Jan 12 cannot be overstated. It is a case in which the letters of Ohanaeze?s Constitution were skillfully used to destroy the spirit of the Constitution. Self-serving legalism now threatens to destroy the legitimacy of Ohanaeze leadership and alienate the followership. The grim harvest has begun with the unprecedented open rebellion of three state-members.??

He warned that the crisis ??if unchecked will be a poisoned arrow at the heart of Ohanaeze. We must save Ohanaeze. The burden of history lies on your shoulders, the elders?. Lamenting on the personalization of Ohaneze for four years by the Uwechue leadership, Chukwumerije wondering how the situation degenerated to extent ? in which key organs of Ohanaeze like Ime-Obi and General Assembly could be dispensed with for over a year while the leadership loudly and regularly proclaim policies and priorities on behalf of Ndigbo all over the media speaks eloquently of a solo performance, Non institutionalization of its organs leaves Ohanaeze open to manipulation by any President-General and his captive Executive Committee?. He warned of the consequences of Ohaneze failing saying that??. If Ohanaeze collapses today or merely vegetates along as an unfruitful tree in the desert, your ancestors will hold you accountable. History will not forgive you.?

Unfortunately, the predictions of Senator Chukwumerije came to pass as there was massive bribing of Ohanaeze before the elections 2015 presidential, a matter that led to the breaking up of the body into three groups. A faction of the body received N5 billion endorsement gift and negotiated nothing for Ndigbo, an act which led the Rev Obinna Akukwe led Igbo Mandate Congress (IMC) to mobilize some members of Ohanaeze Ndigbo National Executives and Ohanaeze Ndigbo Chapter Presidents in the 19 Northern States with Chief Benson Ezeudo,(Niger State ), Rev Offodile Igwesi (Jigawa State), Barrister A.C Amaechi (Kaduna State), Mr Ede Joseph Okafor (Bauchi State), Hon Timothy Nwadike (Taraba State) and Rev Nnamdi Okereke (Zamfara State) leading other state chapter presidents to publicly expose ,renounce and reject the bribe for endorsement gift, asking the faction that collected the money to return same to their principals.

They also issued various press releases rejecting the bribery scandal. Igbo Mandate Congress and Ohanaeze Ndigbo in the 19 Northern States is still watching the show of shame within Ohanaeze and the beggarly attitude of Igbo leaders and will soon make a statement to that regard if the feuding masquerades fail to respect themselves.

Thank you. May you live till ripe old age.
Comrade Uche Chukwumerije, Senator

We Stand with Ohanaeze, Afenifere NEF, others on Atiku – Groups