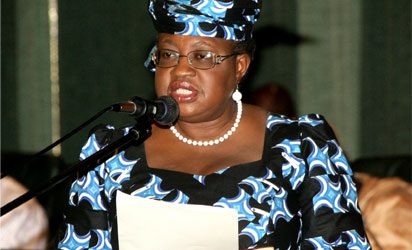 It is the season of politics and as the 2015 elections get closer, political mischief is rising like mercury inside a thermometer during the dry season. This is reflected in the fact that the orchestrated campaign against the Coordinating Minister for the Economy and Minister of Finance, Dr Okonjo-Iweala by compromised media analysts is also on the rise. The newspapers and magazines are full of articles by sponsored political ?analysts? masquerading as objective commentators on national affairs. Dele Sobowale, the Sunday Vanguard columnist is one of the champions of the anti-Okonjo-Iweala brigade. He has deployed his platform as a battering ram against Okonjo-Iweala, spewing out a constant stream of lies. Like others before him, he will fail because the truth, as always, will have the last say over scented falsehood.

For several weeks now, Sobowale, armed with malice, shallow logic and an abiding contempt for facts, has been trying to convince his readers that the only problem with the Nigerian economy is Okonjo-Iweala and that if only the President will do the bidding of Sobowale?s paymasters and sack her, economy will be transformed overnight, poverty will vanish, joblessness will disappear and we will all live happily ever after. Any right thinking person with even an elementary grasp of the facts of the Nigerian economy knows that this is arrant nonsense but Mr Sobowale insists on his fundamental right to peddle it.

Why was Mr Sobowale asking for Okonjo-Iweala?s head this time around? The main thing one could make out from the garbled, self-absorbed article is that the Coordinating Minister did not listen to Sobowale?s wise advice to reduce the initial $78 benchmark price on which the 2015 budget proposed to the National Assembly by the Executive was based. The charge is as ridiculous as it is false.

According to Sobowale: ?First, she (Okonjo-Iweala) sent a budget to the National Assembly, with $78 as benchmark, at a time when the price of crude oil was already sliding downwards. We told her $78 was unrealistic; she stuck to her guns. Second, when crude came down to under $80 per barrel, she sent her ?more realistic? budget based on $73 per barrel. Again, we cautioned that the figure is still unrealistic. As fate would have it, the price of crude oil fell below $73 per barrel the day after she was beating her chest about presenting a ?more realistic? budget??

Mr Sobowale, like me, is not an economist. But you don?t need to have an Economics degree to qualify for common-sense, a quality which is deeply lacking in his piece. In his desperation to earn his supper, he left out relevant facts and context. The first one is that, as widely reported in the media, the Finance Minister had made it clear that measures adopted by the Federal Government as part of its proactive and multi-pronged management of the effects of the steep decline in oil prices were based on a scenario based approach. What this means is that the government was ready with appropriate measures depending on the specific price of oil at any given time. In other words, Mr Sobowale, contrary to his self-congratulatory analysis, was not saying anything new.

This is clear from the statement by the Federal Ministry of Finance issued on November 16, 2014:

?The Federal Government has announced a multi-pronged strategic response to mitigate the adverse effects of the decline in global oil prices, protect growth, reassure investors and keep the economy on a stable course through the crisis which has seen a significant drop in oil revenues for Nigeria and other oil producing countries since June. The response is a mix of measures designed to boost non-oil revenues further, plug loopholes and waste and cut unnecessary expenditures in order to cope with the situation. It is also scenario-based and additional measures will be introduced if oil prices fall further.?

Explaining further, Dr Okonjo-Iweala put in succinctly: ?Panic is not a strategy. Our scenario based-approach to managing the impact of the oil price drop is proactive and comprehensive. Even if the price drops to $60 per barrel, government is ready.? The minister?s comments were widely reported in both local and international media. But blinded by bile and bias, Sobowale, of course could not see that he is not quite the great prophet he thinks he is.

Why didn?t government propose a benchmark price of, say, $30 dollars per barrel for the 2015 budget? The answer is again, quite simple. Lowering the benchmark means reducing the resources available to fund the budget at a time that the fiscal buffers are not robust enough. So it is not a simple matter of will power.

Why are the buffers thin? Again, the facts are clear. As some Nigerians have recently pointed out, Okonjo-Iweala, in the Executive?s budget discussions with the National Assembly over the past three years, has consistently championed a low benchmark price to encourage greater savings so that the country would be better prepared whenever the price of oil goes down like what we are currently witnessing. It is also public knowledge that she advocated robust savings in the Excess Crude Account so that the country would have something set aside for the rainy day. On both counts, she was rebuffed by the National Assembly and the governors, some of whom can be paraphrased as saying, ?The rainy day is already here! Let?s spend now?!

This is the key reason why our fiscal buffers are thin and Mr Sobowale, if he were really an objective commentator, would have reflected these well known facts in his analysis. It is also instructive that he never canvassed support for a lower budget benchmark in his column or use his platform to advise the governors to reduce the pressure on spending the Excess Crude Account. Given this fact, his shallow analysis and call for the sack of the Finance Minister shows what happens when lack of professionalism meets lack of principle.

Unlike Dele Sobowale, Abraham Ogbodo of the Guardian on Sunday has not been a copious and unrelenting critic of Okonjo-Iweala. So when expected that an editor of his calibre and experience, despite the lurid and false headline, would have something substantial to say, contribute some fresh ideas to help the country get through these times. But one was disappointed because he opted instead for woolly generalisations and snide remarks. His article, ?Now that Okonjo-Iwealanomics has failed? is just as inaccurate and mean spirited as Sobowale?s, exhibiting little or no respect for facts. His strategy is to declare that Okonjo-Iweala as Coordinating Minister for the Economy is personally responsible for every aspect of national life and activity, including presumably the gutter in front of the Ogbodo home and is therefore personally responsible for everything that goes wrong in the country. Yes, the columnist believes that one woman in a country of 170 million people run by three tiers of government is the person on which everything rests and depends. This is the way he puts it:

?She coordinates the physical (sic) and social infrastructures of the economy. In effect, she is the person to answer questions on agriculture, education, health, security, electricity, building of roads and bridges and so on. It is quite a basin full, but Madam has been doing well, proving at every point that her experience at the World Bank puts her in a fine stead to direct the affairs of the entire country on behalf of President Goodluck Jonathan and Nigerians.?

There is not much clarity in what Mr Ogbodo says in his sweeping references to Keynes and Milton Friedman. But he is sure of one thing: Okonjo-Iweala is responsible for everything wrong with Nigeria. To drive home the point, he declares that ?Here in Nigeria, there is a sovereign trust kept aside for a so-called rainy day whereas it is already raining cat and dog (sic)?. This statement is unbelievable, given the facts. Okonjo-Iweala and the Economic Team, working under the leadership of the President, worked hard, in the face of stiff opposition by some governors to set up the Nigerian Sovereign Investment Authority (NSIA) which manages the country?s Sovereign Wealth Fund. Because of this opposition, the Fund has only $1.55 billion, which is quite small given global standards. But the NSIA which has received prizes and commendations for its high governance standards is helping to fund ongoing work on the Lagos-Ibadan Expressway and the Second Niger Bridge. Mr Ogbodo doesn?t know these elementary facts about the timely and productive initiative he is unhappy about but he is sure the Coordinating Minister is to blame. This is a disservice to his readers who certainly deserve fact-based analysis, not sweeping unsupported statements.

Like Sobowale, Ogbodo ignores anything which is not in sync with their negative predetermined conclusions such as the fact that Okonjo-Iweala is currently leading work on a national mortgage programme which has kicked off with the processing of over 66,000 mortgage applications from all over the country. There is no place in their passionate anti-Okonjo-Iweala analysis for the fact that the lady is also working hard on the Development Bank of Nigeria, a development finance institution which will make medium and long  term loans of up to 15 years available to our entrepreneurs and businessmen for the first time, starting from early next year.

Any credible analysis should give Okonjo-Iweala and the economic Team credit that despite the current challenges facing the economy, serious investors like General Electric and Old Mutual of the US, Indorama of Indonesia, AXA Insurance of France which recently bought into Mansard Insurance and many others are either already established here or coming into the country. This is the product of prudent and stable economic management.

Okonjo-Iweala is fond of saying that no one is perfect and that government is certainly not perfect. The country needs constructive criticism and ideas especially at this challenging time. But the kind of criticism that distorts facts or sidesteps elementary logic in the service of an unholy agenda is neither good for the country nor for the reputation of the writer.

* Mohammed Seidu writes from Kaduna state where he works as a civil servant.