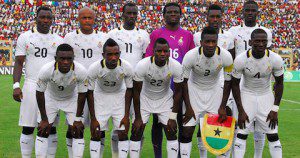 The game begun well for the Cranes in the first minutes of the match but they quickly lost control giving the scoring opportunities to the Stars but goal keeper Onyago Denis of Uganda will simply not allow any scoring chance as he perfected on his duty.

The Stars created many opportunities but were all wasted through as they hanged on the ball for too long.

The Cranes received four yellow card with Juuko Murushid alone receiving two cards with a number of substitutions being made by both teams.

In the first half of the game, the Cranes of Uganda made a number of good trials at goal in the first few minutes in the match.

Both goal keepers made good safes with Razak Braimah coming quickly at the 14th minutes of the game to safe a corner kick which nearly resulted in a goal.

In what appears to be the greatest opportunity for the Black Stars to have made the opener was at the 46th minute when Christian Atsu wasted the chance after beating three markers sending the first half of the first game in the World Cup qualifiers to an end.

The game was fairly officiated by Fadil Mohammed Hussein and his three assistants who are all Sudanese.