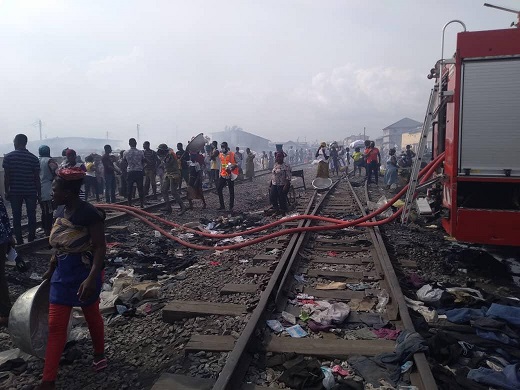 Scores of traders affected by the Kantamanto fire incident are counting their loss, 12 hours after the inferno, with a call on government and philanthropists to come to their aid.

Representatives of the traders, in an interview with the Ghana News Agency, said they had lost all means of their livelihood in the fire.

Mr Kwame Ansong, a wholesale charcoal trader, said many bags of charcoals which had just been delivered for the Christmas festivities were lost in the fire.

On behalf of other traders, Mr Ansong called on the government and philanthropists to come to their aid, since their source of livelihood has been lost.

Madam Gifty Afoakwa, another Kantamanto trader, called for government’s support for them to recover quickly from the disaster, saying, “We are down, we have mostly stockpiled for the Xmas sales but now all the investment is gone”.

She alleged that the incident was the work of arsonists and called on the security agencies to identify and prosecute them to serve as a deterrent.

She, however, commended the Ghana National Fire Service for their swiftness to contain the situation, saying but for their intervention, the fire would have spread to other areas.

The fire which started at 22: 00 hours on Tuesday, December 15, destroyed a section of the market designated for second hand cloth and shoe dealers.

So far, no human casualty has been recorded but shops, stores and stalls of second-hand clothing among other items were razed. Eateries, drinking spots and charcoal wholesale centres were also burnt.

Mr Ramzy Ameyaw, Kantamanto Youth Chairman, said they heard that the some shops had got fire as they rushed to the scene to save the situation.

He said they tried fighting the fire at its initial stages but it became intensive, during which the fire service personnel arrived.

He commended the youth for coming out in their numbers to help contain the situation, saying, but for their timely intervention, the situation would have been worse before the arrival of the GNFS.

Divisional Officer Class One, Mr Ellis Robinson Okoe, Head of Public Relations, GNFS National Headquarters, said they received a distress around 23:33 hours and arrived at the scene at 23:40 hours.

He said they brought in eight fire tenders from eight fire stations to help contain the situation. They were joined by the Police and the Ghana Army which brought along water tankers.

He said the fire was contained by 05:00 hours on Wednesday, December 16.

He said if they had not arrived at the scene on time, the fire would have spread to other areas in Kantamanto.