Madam Teresa Dagbey, the Ho Central Market Queen, has called on the Ho Municipal Assembly (HMA) to be fair in the allocation of stores at the yet to be completed new Central Market. 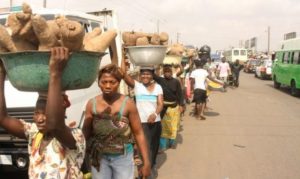 On Wednesday, January 4, 2017, the Ho Market Sellers Association issued a statement alleging that the Assembly had allocated the stores to government workers and people who were not trading at the market.

The traders in the statement threatened to stop paying market tolls should the Assembly fail to allocate the stores to traders on a list submitted by Madam Dagbey.

Addressing a press conference on Thursday, Madam Dagbey alleged that the Assembly refused to rescind its decision and pleaded with other stakeholders to prevail on the Assembly to “do the right thing.”

“All efforts to speak to the Municipal Chief Executive on phone proved futile and I will like to appeal to the press to use their medium to get the Assembly to do the right thing,” she said.

Mrs. Dake Charity Fasey, the Assistant Market Queen, also alleged that the warehouses which were initially built for corn and groundnut sellers were not given to them.

Mr Kofi Gbedemah, a local representative of the Institute for Democratic Governance (IDEG) who was at the press confab as a resource person appealed to both the Market Sellers Association and the Assembly to go back to the negotiation table on the allocation.