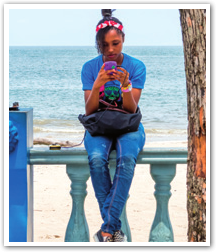 ?In a long-awaited boost for the country?s competitive mobile telephone sector, Gabon?s first commercial 3G service became available in late April. Airtel Gabon, the largest mobile operator by market share, was the first to launch 3G services, and Gabon Telecom announced that it plans to follow suit before year-end 2014.

Turnover in the mobile telephony sector has grown steadily in recent years despite limited fibre-optic connectivity and the sector?s reliance on 2G technology, but the market is marked by intense competition among operators and is reaching saturation. The launch of 3G services will be a critical step to expanding mobile activity, boosting sector revenue and expanding affordable internet access.

In the near-term, however, the current state of the fibre-optic network is likely to be an obstacle to 3G growth, although efforts to improve information and communications technology (ICT) infrastructure should help to facilitate penetration, particularly in rural areas.

The award of the first 3G/4G licences marked the start of a new era in Gabon?s telecoms sector. Airtel Gabon, a subsidiary of India?s Bharti Airtel, obtained its operating licence on March 20 at the standard cost of CFA5.5bn (?8.4m) and launched commercial 3G service on April 18. Service is currently available in northern Libreville, covering an area from the town centre to the northern suburb of Angondj?. According to Airtel managing director Antoine Pamboro, service will be extended to southern Libreville and the port town of Owendo in the next quarter and to Port-Gentil and other provincial capitals by the end of 2014.

Gabon Telecom (known by the brand name of Libertis), the legacy telecoms operator and currently second-largest by market share, was awarded its official operating licence on April 24. According to company executives, 3G service will be rolled out later this year, once necessary upgrades to its infrastructure network are completed. The most recent market entrant, Usan Gabon (known by the brand name Azur), a subsidiary of Lebanon?s Bintel, is also pursuing a 3G/4G licence. Operators have all invested heavily in infrastructure in the past two years, anticipating the launch of 3G service and a strong uptick in demand.

As with most African markets, mobile phones are ubiquitous after years of rapid market growth, and with four operators in the segment, competition is tight, which has put pressure on revenues. As a result, firms are increasingly looking to increase value-added services and encourage users to make use of mobile content. Both Airtel and Gabon Telecom have launched mobile money programmes in partnership with local banks that allow customers to transfer money, pay for goods and receive salary payments by mobile phone, and an increasing number of banks and other service providers are moving onto mobile platforms. The government is developing mobile and online applications in health, education and administration in an effort to ensure broader access to basic services.

However, the spread of both mobile and fixed internet will continue to be restrained in the near-term by limited broadband connectivity. Gabon has been served by a single fibre-optic cable since 2002, the SAT3/WASC, which offers a national capacity of 1.2 Gbit per second. Until 2012, Gabon Telecom had a monopoly over the SAT3, which kept prices for cable access and internet service prohibitively high. Prices dropped sharply when access was opened to all operators, and internet usage expanded quickly.

According to the telecoms regulator, the Autorit? de R?gulation des Communications ?lectroniques et des Postes, the number of internet subscribers increased by 75% year-on-year to reach nearly 497,400 by year-end 2012; mobile phone users accounted for 92% of all internet subscribers in 2012, based on 2G/EDGE technology.

Gabon?s connection to its second fibre-optic submarine cable, the Africa Coast to Europe (ACE), was completed in December 2012 and will help provide the bandwidth necessary to support wide usage of 3G and broadband internet. Landings have been completed in Libreville and Port-Gentil, and the National Agency for Digital Infrastructure and Frequencies (Agence Nationale des Infrastructures Num?riques et des Fr?quences, ANINF) has outlined a plan to build a national fibre-optic backbone with significant support from the World Bank. ANINF has drawn up a short list of firms bidding to conduct studies and build the network, which plans to extend the cable underground from Libreville to the provincial capital of Franceville, and then onward to a connection point on the Congolese border.

The process of expanding and commercialising the country?s new fibre-optic infrastructure is slow, but several international tenders issued in 2013-14 promise to make progress before year-end. The new agency created to manage existing ICT infrastructure on behalf of the state, the Soci?t? de Patrimoine des Infrastructures Num?riques, launched an international tender in the first quarter to select a private firm to operate, maintain and commercialise the fibre-optic network. Ideally, this will allow broad access to the ACE capacity this year.

An international tender was also launched in April to select a firm to complete the cross-border connection and expand the fibre-optic network into the Republic of the Congo, with work slated to begin in June. With significant financial and technical support from the World Bank, Gabon is expected to invest nearly $110m in this regional backbone.

The ACE fibre-optic connection is necessary in order to facilitate the high-speed, low-cost connectivity that will expand mobile and fixed internet access to a much larger segment of the population. After two years of delays, recent progress on efforts to build out the fibre-optic backbone and commercialise existing broadband connections in Libreville and Port-Gentil should begin to advance Gabon?s digital economy.