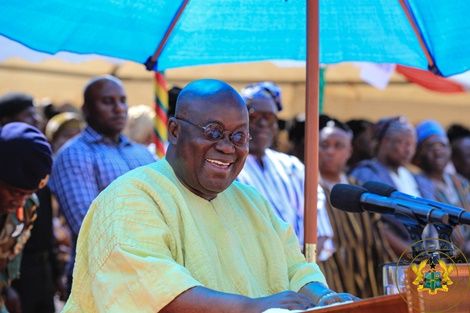 President Nana Addo Dankwa Akufo-Addo has urged Ghanaians to give him and the New Patriotic Party (NPP) another mandate to ensure “more prosperity, more progress and more development for our nation.”

He said his first term of office had been exceptional, with his administration laying the foundation for the development of the country, and that given a second term, Ghana would witness a massive economic transformation under his watch.

The President made the call at separate rallies in Tema, Ashaiman and Teshie on Friday on his final push for votes ahead of the December 7 presidential and parliamentary elections

He told the constituents in those areas that the performance of his government in the last four years was a clear indication of his commitment to bring development to the country.

With far-reaching interventions such as the Free Senior High School policy, the flagship Planting for Food and Jobs programme, the One-Distict One-Factory initiative that had increased the capacity of the nation to be self-reliant, having had positive impacts on the lives and livelihoods of Ghanaians, the President said “give me four more to do more”.

“The New Patriotic Party has the blueprint for the development of Ghana, the foundation for that development has been laid in Akufo-Addo’s first term as President. In the next term, we will be constructing the house of more prosperity, of more progress and of more development for our nation.”

President Akufo-Addo urged the electorate to give him an even larger margin of victory than he secured in the 2016 election, saying, “This time round we want it Boom! Boom! Boom! Boom!

“Repose your confidence in me and give me an even larger margin of victory on December 7, to give me the energy and stregnth to work for us all,” he said.

The President appealed to all eligible voters in the country to turn out in the numbers, and vote massively for him and the New Patriotic Party.

He said everyone who had registered and was in possession of a voter identity card “should not sit at home, and assume that Nana has already won, so I won’t vote’. If you haven’t voted, Nana hasn’t won.”

“So everyone should leave their homes on 7th December, go to your respective polling stations and vote massively for Nana and the NPP. That is what will give us a decisive victory we are after.”

Continue To Keep Faith With NPP Because The Elephants Know How To Survive Under Severe Dry Season: Razak Kojo Opoku Writes