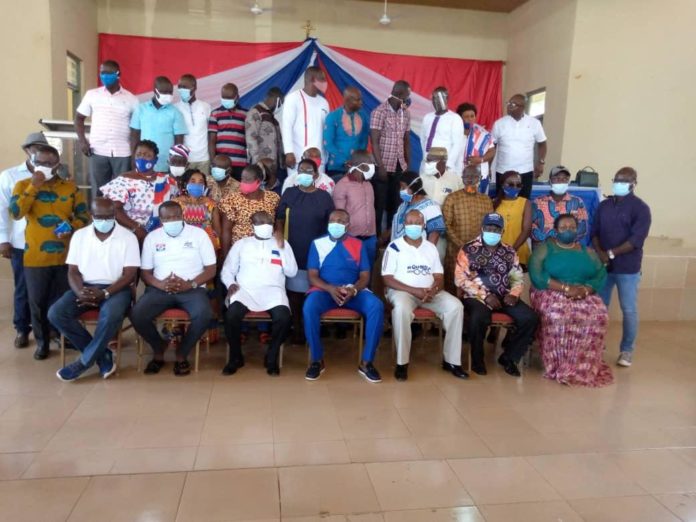 Mr John Boadu, General Secretary of the New Patriotic Party (NPP) at the weekend inaugurated a 36- member Political campaign team to steer the campaign activities of the Party for the 2020 Presidential and Parliamentary Elections.

The General Secretary in the company of Mr Fredick Antoh, National Second Vice Chairman and Mr Abdul Aziz Harunah Futa, National Nazara Coordinator of the Party indicated that the team would be responsible for coordinating all campaign and its related activities in the Region.

Mr Boadu tasked the team members to be dedicated by working hard to ensure the Party won more parliamentary seats in the Region.

The campaign team is being chaired by Mr Williams Benjamin Assuah, Regional Chairman of the Party with all the other 16 constituency executives being members.

Mr John Boadu used the occasion to commend the polling station executives, constituency executives and the regional executives of the Party for their vigilance in ensuring that foreigners did not register in the Aowin, Suaman, Juabeso, Bia West and East Constituencies which share boundaries with neighboring Ivory Coast during the just ended voters registration exercise.

He reiterated that the Party was ready to give the campaign team the needed logistics and support to ensure victory for the Party in the December polls.

Mr Assuah on behalf of the members, pledged to work hard and adopt scientific approach campaign to ensure the Party won more parliamentary seats and increase the Presidential votes.

Mr Aboagye-Gyedu, the Regional Minister, called on residents to vote massively for the NPP in the December polls to show appreciation to the President for the creation of the Western North Region.