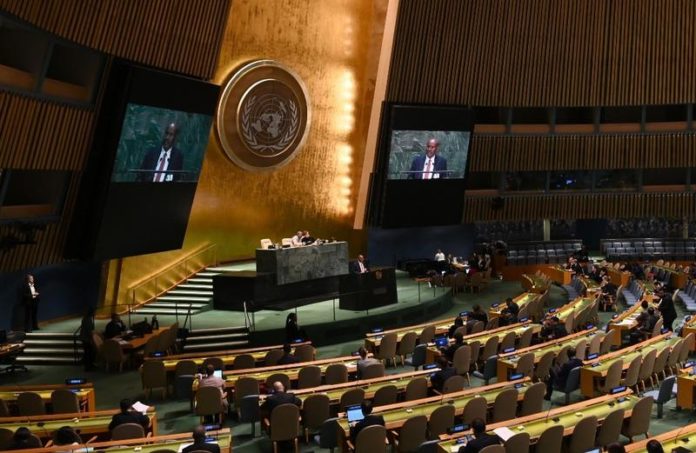 World leaders continued to defend multilateralism in their pre-recorded speeches on the second day of the United Nations (UN) General Assembly high-level week.

Finnish President Sauli Niinisto called for efforts to reverse the trend of waning multilateralism, and encouraged states to have good faith in international affairs.

“Precisely when the demand for global solutions is rising, our ability to provide them is weakening,” he said Wednesday.

“Multilateralism suffers from inward-looking nationalism and great-power competition alike. The institutions that we have built together over decades are under growing pressure. International agreements, norms and principles are increasingly challenged and interpreted in ways which weaken both their potential and their legitimacy,” he noted.

Ultimately, if respect for the commonly agreed rules disappears, there will be not much left of a rules-based order, he warned.

Marking its 75th anniversary this year, the UN Charter remains a remarkable blueprint for the future. But the promise comes with an important condition: states must engage in good faith, he said, adding that only fulfilled obligations lead to rights and benefits.

Multilateral cooperation remains the best approach to addressing challenges and mitigating the suffering of people who are the main reason for the creation of the UN, he said.

“Multilateralism within the UN is also key if we take into account that the world economy, especially that of developing countries, has been severely impacted by the COVID-19 pandemic, and its restoration requires global, integrated and concerted interventions,” said Nyusi.

Nationalism and isolationism are a prescription for failure to respond to COVID-19 and other infectious diseases of an unpredictable nature, he said.

“In the global village in which we live, national and international issues are increasingly less discernible. The transnational nature and interconnection of these phenomena require leadership that recognizes that, in today’s world, our interventions must take into account the intrinsic relationship between the national, regional and global citizens,” he added.

Sefik Dzaferovic, chairman of the Presidency of Bosnia and Herzegovina, made his point by citing his own country’s experiences.
It is an indisputable fact that during the past few years, a very strong crisis of multilateralism has been present on the scene, said Dzaferovic in his pre-recorded speech.

International organizations in general, including the UN, have become an object of strong challenge and even dispute, he said.

The COVID-19 pandemic has shown that the largest problems of today can no longer be solved by individual countries or a couple of countries. These difficulties can only be solved through transnational, multilateral response, based on dialogue and cooperation of as many states as possible, Dzaferovic said.

A historic agreement for an economic recovery package of the European Union (EU) worth over 2 trillion euros (2.34 trillion U.S. dollars) has shown the strength of European unity and can serve as an example to all other parts of the world, he said.

The EU assistance package for Bosnia and Herzegovina to mitigate the economic impact of the pandemic has strengthened the country’s commitment to European integration, he said.

Kenyan President Uhuru Kenyatta said the COVID-19 pandemic defines today’s challenges — challenges that can only be overcome if everyone succeeds.

Kenya’s firm belief in multilateralism is aligned with its shared global values grounded in human dignity, equity, social justice, human rights and good governance, he said. The COVID-19 pandemic should give fresh impetus to collective efforts to strengthen international cooperation.

Luis Abinader, president of the Dominican Republic, said the world is in a better shape than it was in 1945 due in large part to the efforts of the UN. Multilateralism is more essential now than ever as COVID-19 and climate change crises could usher in a range of other conflicts.

A collaborative spirit and more equitable system must prevail when it comes to stopping the pandemic, extending treatment and vaccination, and recovering from the pandemic, he said.

Spread of monkeypox in Africa shows “worrying sign” – WHO