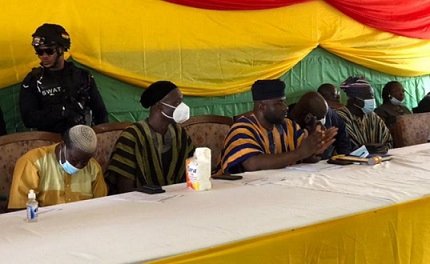 The President’s Nominee for the position of Municipal Chief Executive for Yendi has failed to secure the needed votes from Assembly Members to assume office.

Out of the total 41 Assembly Members, who cast their votes during the confirmation process at Yendi on Friday, Alhaji Ahmed Abubakari Yussif, the Nominee, secured 21 votes representing 51 per cent while 20 others voted against him.

Per the law, the Nominee needed to secure two-thirds of the total votes to be confirmed for the position.
Alhaji Yussif, who is the Acting MCE for the area, therefore, in line with the law, will be presented again in 10 working days for confirmation.

Alhaji Shani Alhassan Saibu, Northern Regional Minister was amongst dignitaries, and some stakeholders of the Assembly, who witnessed the confirmation process.

Mr Hussein Abdul- Karim, Presiding Member of Yendi Municipal Assembly expressed optimism that members would confirm the Nominee in the second round to pave way for the developmental agenda of the government in the area.

He admonished members that “Let us not be acrimonious about the President’s Nominee. Let us affirm him in to allow development in our area.