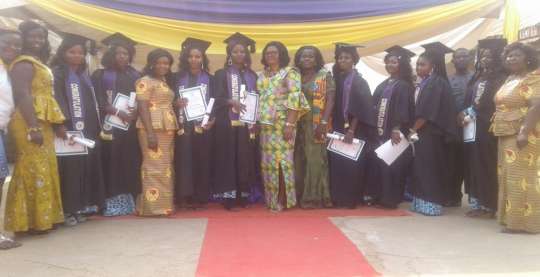 Mrs Janet Akyirem, the President of the Akim Oda branch of the Ghana Hairdressers and Beauticians Association (GHABA), has advised youth interested in handicraft to learn their trade from professional artisans and not to go to wayside operators.

She said professional artisans have usually gone through special programmes related to their trade and had a recognised certificated training.

“I advise you not to consider the low amount charged by wayside operators but rather the issuance of NVTI certificate after graduating from a trade from a professional artisan, because such certificate will help when seeking for a national document or passport,” Mrs. Akyirem said.

She gave the advice during the eighth graduation ceremony for 10 hairdressers and beauticians at Akim Oda in the Eastern Region.

The graduands were issued with NVTI certificates testifying that they have passed the NVTI examinations for their chosen vocation.

Ms Salomey Mirekua, the Eastern Regional President of the Ghana Hairdressers and Beauticians Association, called on the rest of beauticians who were not part of the Association to join in order to get access to new skills and the NVTI certificate.

She explained that, the certificate will help them seek employment in other sectors including the security agencies like the Ghana Prisons, Police Service, Ghana National Fire Service among others.

Mrs Victoria Adu, the Birim Central Municipal Chief Executive advised people with vocational skills to come together to form associations to get support from the government.

She said trade associations now have a slot in the appointment of government appointees to the Municipal and District Assemblies to fight for the interest of artisans in the assemblies.

Nana Ama Adobea I, the Guantoa Hemaa of Akuapem Mampong who was there to grace the occasion, cautioned female apprentices against indecent dressing to protect the image of the trade.