His remarks come after being recently adjudged the Fintech CEO of Year at the 10th Ghana Information Technology and Telecom Awards (GITTA), where Zeepay also emerged Fintech Company of the Year.

According to him, that was their first GITTA, and they see it as evidence of the recognition of what they have been doing over the past six years of their existence.

“This is the first GITTA for the company and for me – clearly the market appreciates what we have done so far,” he told Techgh24 in an exclusive interview.

Andrew Takyi-Appiah recalled that six years ago, Zeepay begun with serving just about 365 customers in a month, but now the company is serving well over 2 million customers in Ghana alone on month basis, and terminating a whopping US$350 million of international remittance every year in Ghana, which constitutes 10% of all international remittance coming to the country.

According to him, Zeepay set out on the back of a finding by GSMA that the fastest use case for Mobile Money (MoMo) was remittance to wallet and card transfers.

“We have always wanted to be a MoMo operator, but our strategy was to start from the back by disrupting the remittances market, which was then dominated by banks, with a technology that enables direct transfer into MoMo wallets and unto Visa cards and other payment cards, which the banks were not doing,” he said.

He said with a local staff strength of about 24 and the partnership of over 40 world class money transfer companies, they have been able to take away the burden of people having to travel to banking halls and spend hours waiting to cash out remittances.

Zeepay only got the Mobile Money license in March this year, after aggregating international remittances and terminating them on other mobile wallets and electronic payment cards for the past six years.

“This year alone we have served over 2 million people in Ghana who never saw us but they enjoyed a service that is enable by our platform,” the Zeepay boss said.

“At this level, we have already achieved 10 to 15% of our world domination vision and we are well on our way to realizing the vision in the near future with a clear strategy backed by a lot of right investment and science,” he said.

He is confident that Zeepay will “surely” achieve world dominance because they are investing into the most critical areas – distribution, branding, visibility and the science.

“We already work with between 40 and 50 world class money transfer companies – they include MoneyGram, Worldremit, Ria, SmallWorld, Transfast and all the others except WesternUnion,” he said.

According to him, currently 99% of Zeepay’s corporate clients are foreign blue-chip companies, through whose partnership, Zeepay is able to terminate at least US$350 million international remittances directly into mobile money wallets and ATM cards in Ghana annually. 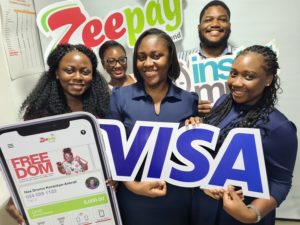 The company, he said, also has footprints in at least 30 African countries with registration in Ghana, “no-objection to operate” in several other Eastern and Western African countries, and authorization in Cote d’Ivoire, which gives it access to the entire Francophone zone.

“We are active in at least nine of the 30 Africa countries – I mean 30 days active – meaning there are transactions every day in all the nine countries,” he explained.

According to him, Ivory Coast is currently Zeepay’s number one market outside of Ghana, explaining that “in cedi terms we are doing at least about a GHC40 million a month in Ivory Coast and we are looking at completely dominating that corridor by next year then that becomes a springboard to go into the Francophone zone fully.”

“We are also set to enter the Caribbean market soon – we are ready to dominate,” he added.

The Zeepay CEO said the company also has a Remittance License in the UK from the FCA, which gives them access into the rest of Europe, unless Brexit changes the status of the license.

He believes that for a wholly-owned Ghanaian company like Zeepay to rise from just a couple of hundreds of customers in 2015 to become a significant market player in the remittances space, serving not less than 2 million customers every month, speaks volumes of the industriousness of the Ghanaian youth.

In Ghana, Zeepay also has partnerships with ECOBANK and GT Bank across their markets in Africa, plus it also has MTN, Airtel and Vodafone as partners for its international remittance aggregation business.

Andrew Takyi-Appiah believes the best form of disruption is one that has less human intervention, saying that Zeepay is there is a world class model fintech with end-to-end digital operations.

“Our whole business is designed to be light and layered – we are a suitcase business – even in our building, there is not a single platform, no server – only laptops – so if our building burns down today, we walk out of the building and continue working as if nothing happened,” he said.

He was proud to state that even though 99% of its growth is from businesses abroad, Zeepay is very conscious of investing its earnings locally to benefit the Ghanaian economy.

A case in point is the ongoing construction of the company’s new ultra-modern office at Cantonments in Accra, which was done by a local contractor called Gibson, who, Andrews Takyi believes, has the quality of any of the world class foreign building contractors.

Zeepay distances itself from fake investment schemes on social media